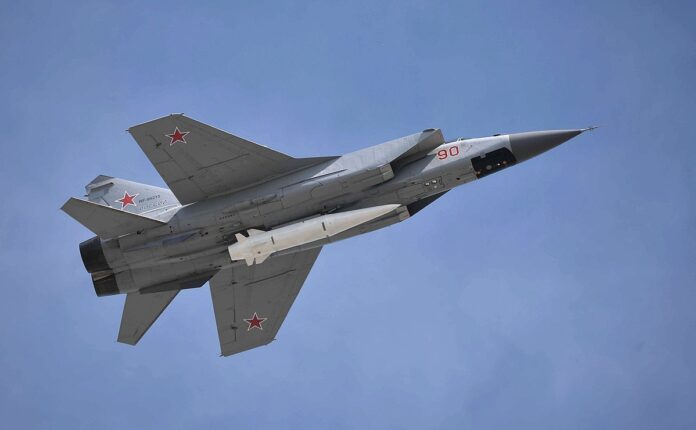 Hypersonic missiles are currently being developed mainly by the United States, Russia, and China. Other countries besides these three are also developing hypersonic technology to some degree.

Avangard is a hypersonic glide vehicle launched from an intercontinental ballistic missile (ICBM), giving it “effectively ‘unlimited’ range.” Reports indicate that Avangard is currently deployed on the SS-19 Stiletto ICBM, though Russia plans to eventually launch the vehicle from the Sarmat ICBM. Sarmat is still in development, although it may be deployed by 2021. Avangard features onboard countermeasures and will reportedly carry a nuclear warhead. It was successfully tested twice in 2016 and once in December 2018, reportedly reaching speeds of Mach 20; however, an October 2017 test resulted in failure. Russian news sources claim that Avangard entered into combat duty in December 2019.

In addition to Avangard, Russia is developing Tsirkon, a ship-launched hypersonic cruise missile capable of traveling at speeds of between Mach 6 and Mach 8. Tsirkon is reportedly capable of striking both ground and naval targets. According to Russian news sources, Tsirkon has a range of between approximately 250 and 600 miles and can be fired from the vertical launch systems mounted on cruisers Admiral Nakhimov and Pyotr Veliky, Project 20380 corvettes, Project 22350 frigates, and Project 885 Yasen-class submarines, among other platforms.67 These sources assert that Tsirkon was successfully launched from a Project 22350 frigate in January 2020. U.S. intelligence reports indicate that the missile will become operational in 2023.

In addition, Russia has reportedly fielded Kinzhal, a maneuvering air-launched ballistic missile modified from the Iskander missile. According to U.S. intelligence reports, Kinzhal was successfully test fired from a modified MiG-31 fighter (NATO code name: Foxhound) as recently as July 2018—striking a target at a distance of approximately 500 miles—and is expected by U.S. intelligence sources to become ready for combat by 2020. Russia plans to deploy the missile on both the MiG-31 and the Su-34 long-range strike fighter. Russia is working to mount the missile on the Tu-22M3 strategic bomber (NATO code name: Backfire), although the slower-moving bomber may face challenges in “accelerating the weapon into the correct launch parameters.” Russian media has reported Kinzhal’s top speed as Mach 10, with a range of up to 1,200 miles when launched from the MiG-31. The Kinzhal is reportedly capable of maneuverable flight, as well as of striking both ground and naval targets, and could eventually be fitted with a nuclear warhead. However, such claims regarding Kinzhal’s performance characteristics have been met with skepticism by a number of analysts.

Programs Unlike China and Russia, the United States is not currently developing hypersonic weapons for use with a nuclear warhead. As a result, U.S. hypersonic weapons will likely require greater accuracy and will be more technically challenging to develop than nuclear-armed Chinese and Russian systems. Indeed, according to one expert, “a nuclear-armed glider would be effective if it were 10 or even 100 times less accurate [than a conventionally-armed glider]” due to nuclear blast effects.

According to open-source reporting, the United States has a number of major offensive hypersonic weapons and hypersonic technology programs in development, including the following

These programs are intended to produce operational prototypes, as there are currently no programs of record for hypersonic weapons. Accordingly, funding for U.S. hypersonic weapons programs is found in the Research, Development, Test, and Evaluation accounts, rather than in Procurement. U.S. Navy In a June 2018 memorandum, DOD announced that the Navy would lead the development of a common glide vehicle for use across the services. The common glide vehicle is being adapted from a Mach 6 Army prototype warhead, the Alternate Re-Entry System, which was successfully tested in 2011 and 2017.  Once development is complete, “Sandia National Laboratories, the designer of the original concept, then will build the common glide vehicles…. Booster systems are being developed separately.”

The U.S. Navy’s Conventional Prompt Strike (CPS) is expected to pair the common glide vehicle with a submarine-launched booster system, achieving initial operational capability (IOC) on a Virginia-class submarine with Virginia Payload Module in FY2028. The U.S. Navy is requesting $1 billion for CPS in FY2021—an increase of $415 million over the FY2020 request and $496 million over the FY2020 appropriation—and $5.3 billion across the five-year Future Years Defense Program (FYDP).

In particular, China’s pursuit of hypersonic weapons, like Russia’s, reflects a concern that U.S. hypersonic weapons could enable the United States to conduct a preemptive, decapitating strike on China’s nuclear arsenal and supporting infrastructure. U.S. missile defense deployments could then limit China’s ability to conduct a retaliatory strike against the United States.

China has demonstrated a growing interest in Russian advances in hypersonic weapons technology, conducting flight tests of a hypersonic-glide vehicle (HGV) only days after Russia tested its own system. Furthermore, a January 2017 report found that over half of open-source Chinese papers on hypersonic weapons include references to Russian weapons programs. This could indicate that China is increasingly considering hypersonic weapons within a regional context. Indeed, some analysts believe that China may be planning to mate conventionally armed HGVs with the DF-21 and DF-26 ballistic missiles in support of an anti-access/area denial strategy. China has reportedly not made a final determination as to whether its hypersonic weapons will be nuclear- or conventionally-armed—or dual-capable. Programs China has conducted a number of successful tests of the DF-17, a medium-range ballistic missile specifically designed to launch HGVs. U.S. intelligence analysts assess that the missile has a range of approximately 1,000 to 1,500 miles and could be deployed in 2020. China has also tested the DF-41 intercontinental ballistic missile, which could be modified to carry a conventional or nuclear HGV, according to a report by a U.S. Congressional commission. The development of the DF-41 thus “significantly increases the [Chinese] rocket force’s nuclear threat to the U.S. mainland,” the report states. China has tested the DF-ZF HGV (previously referred to as the WU-14) at least nine times since 2014. U.S. defense officials have reportedly identified the range of the DF-ZF as approximately 1,200 miles and have stated that the missile may be capable of performing “extreme maneuvers” during flight. Although unconfirmed by intelligence agencies, some analysts believe the DF-ZF will be operational as early as 2020. According to U.S. defense officials, China also successfully tested Starry Sky-2 (or Xing Kong2), a nuclear-capable hypersonic vehicle prototype, in August 2018.  China claims the vehicle reached top speeds of Mach 6 and executed a series of in-flight maneuvers before landing. Unlike the DF-ZF, Starry Sky-2 is a “waverider” that uses powered flight after launch and derives lift from its own shockwaves. Some reports indicate that the Starry Sky-2 could be operational by 2025. U.S. officials have declined to comment on the program.

Japan is developing a hypersonic anti-ship missile, a weapon that can cruise at high altitudes and could pose a threat to Chinese aircraft carriers in the East China Sea. The Ministry of Defence has said it would be a hyper velocity gliding projectile (HVGP) and it planned to deploy an early version of the missile in 2026, followed by an enhanced version after 2028. The planned missile would be able to travel at five times the speed of sound, meaning it would be a hypersonic weapon. With such a missile in service, Japan would be the fourth country in the world armed with hypersonic gliding technology, after China, Russia and the United States. The technology allows a missile to glide at high speed in the upper atmosphere – a weak spot for air defence systems – and to follow complex trajectories, making it difficult to intercept with existing anti-missile shields. Japan’s first missile would focus on land targets, while the upgraded version would feature claw-shaped payloads, enhanced speeds and firing ranges to attack large surface ships, the ministry said.

India is also working for developing hypersonic missiles. BrahMos-II is a hypersonic cruise missile currently under joint development by Russia’s NPO Mashinostroyenia and India’s Defence Research and Development Organisation, which have together formed BrahMos Aerospace Private Limited. It is the second of the BrahMos series of cruise missiles. The BrahMos-II is expected to have a range of 450 kilometres  and a speed of Mach 7. During the cruise stage of flight the missile will be propelled by a scramjet airbreathing jet engine. Other details, including production cost and physical dimensions of the missile, are yet to be published. Its top speed will be double that of the current BrahMos-I, and it has been described as the fastest cruise missile in the world. Russia is developing a special and secret fuel formula to enable the BrahMos-II to exceed Mach 6. Although BrahMos II was initially intended to be fielded in 2017, news reports indicate that the program faces significant delays and is now scheduled to achieve initial operational capability between 2025 and 2028.

Australia has a small group of world-class researchers of hypersonics based primarily at the University of Queensland. They have participated in a series of collaborations on scramjet technology with the United States and Europe. The Hypersonic International Flight Research Experimentation (HIFiRE) program is a long-standing collaboration of Australia’s Defence Science and Technology Group and the U.S. Air Force Research Laboratory with participation by other Australian and U.S. entities. The program is fairly advanced; in May 2016, researchers launched successful and affordable tests of scramjet prototypes at speeds of up to Mach 7.5. In contrast, Australia’s indigenous hypersonic research programs have encountered some problems and setbacks, and, as a result, have seen a reduction in funding over the years.

France also has collaborated and contracted with Russia on the development of hypersonic technology. Although France has been investing in hypersonic technology research since the 1990s, it has only recently announced its intent to weaponize the technology. Under the V-max (Experimental Maneuvering Vehicle) program, France plans to modify its air-to-surface ASN4G supersonic missile for hypersonic flight by 2022. Some analysts believe that the V-max program is intended to provide France with a strategic nuclear weapon.

Germany successfully tested an experimental hypersonic glide vehicle (SHEFEX II) in 2012; however, reports indicate that Germany may have pulled funding for the program. German defense contractor DLR continues to research and test hypersonic vehicles as part of the European Union’s ATLAS II project, which seeks to design a Mach 5-6 vehicle.

Other countries—including Iran, Israel, and South Korea—have conducted foundational research on hypersonic airflows and propulsion systems, but may not be pursuing a hypersonic weapons capability at this time.