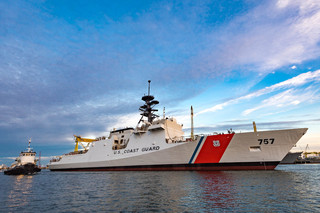 Huntington Ingalls Industries launched its eighth National Security Cutter vessel, Midgett, for the U.S. Coast Guard on Wednesday.
Midgett, a Legend-class cutter, launched off a dock in Pascagoula, Mass., Wednesday morning and will be christened during a ceremony Dec. 9.
Legend-class cutters are being designed and procured to replace the service’s legacy Hamilton-class cutters, which have been in service since the 1960s.
The Legend class is the largest and most technologically advanced class of cutter, which are considered the centerpiece of the Coast Guard’s fleet.
The vessel was named to honor John Allen Midgett, who was awarded the Silver Cup by the U.K. Board of Trade in 1918. Midgett received the award for rescuing 42 British sailors aboard the British tanker Mirlo after it was torpedoed by a German U-boat off the coast of North Carolina.