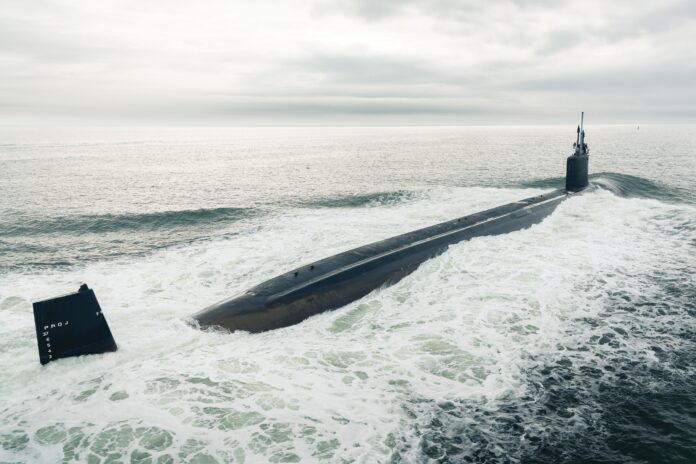 Huntington Ingalls Industries Delivers Virginia-Class Submarine Indiana (SSN 789) to U.S. Navy  Huntington Ingalls Industries’  Newport News Shipbuilding division delivered the newest nuclear-powered fast attack submarine to the U.S. Navy on June 25.
The future USS Indiana (SSN 789) is the 16th Virginia-class submarine built as part of the teaming agreement with General Dynamics Electric Boat and the eighth delivered by Newport News. “We are proud to deliver Indiana to the Navy,” said Dave Bolcar, Newport News’ vice president of submarine construction. “For the nearly 4,000 shipbuilders who participated in construction of the boat, there is nothing more important than knowing that this vessel will support the Navy’s missions.” Indiana, which began construction in September 2012, successfully completed sea trials earlier this month. The vessel will be commissioned later this year.
Virginia-class submarines are built for a broad spectrum of open-ocean and littoral missions to replace the Navy’s Los Angeles-class submarines as they are retired.
These submarines are capable of supporting multiple mission areas and can operate at submerged speeds of more than 25 knots for months at a time.