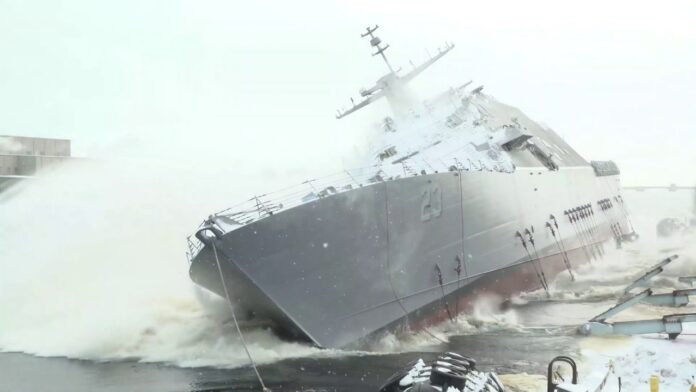 Ship sponsor Alba Tull broke a champagne bottle across the hull in a ceremony in Marinette.

Lockheed Martin-led team launched the ship into the water on Jan. 19, and it’s slated to begin sea trials later this year.

“The versatility, speed and lethality of the LCS make it a critical tool to help sailors achieve their missions,” said Joe DePietro, Lockheed Martin vice president of small combatants and ship systems. “Today’s christening brings the USS Cooperstown one step closer to joining a capable fleet of ships supporting Navy missions in a multitude of ways.”

LCS 23 is the 12th Freedom-variant LCS, the 23rd in the class. She is the first ship named in honor of Cooperstown, New York. Cooperstown received its name on July 25, 2015, during a ceremony at the National Baseball Hall of Fame, which is located in Cooperstown. Her name honors the veterans who are members of the Baseball Hall of Fame located in the namesake city. These 64 men served in conflicts ranging from the Civil War through the Korean War.

The Freedom-variant LCS ships are capable of speeds in excess of 40 knots and are automated with the most efficient staffing of any combat ship. They are equipped with Rolling Airframe Missiles (RAM) and a Mark 110 gun, capable of firing 220 rounds per minute, as standard and is flexible with 40 percent of the hull easily reconfigurable, integrating capabilities like the Longbow Hellfire Missiles, 30mm guns, and manned and unmanned vehicles targeted to meet future missions.