navalpost
Home Naval Articles How did HSwMS Gotland hunt the US aircraft carrier during an exercise? 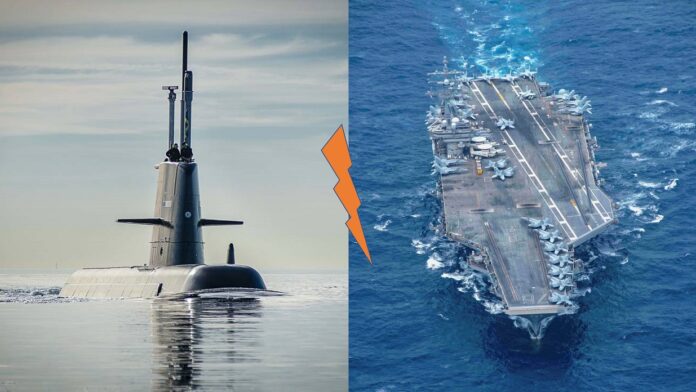 The USS Ronald Reagan, a newly built $6.2 billion aircraft carrier, was hunted in 2005 by a Swedish submarine. Fortunately, it didn’t happen in actual combat. Still, it was simulated as part of a war game. A carrier task force with numerous antisubmarine escorts faced off against HSwMS Gotland, a small Swedish diesel-powered submarine weighing 1,600 tons. Despite multiple attacks on Reagan, the Gotland was never detected. Instead, the US Navy leased the Gotland and its crew for two years to conduct antisubmarine exercises. The results convinced the US Navy that its undersea sensors could not deal with the stealthy HSwMS Gotland.

How did the HSwMS Gotland manage to avoid Reagan’s elaborate antisubmarine defenses?

Previously, diesel submarines could only navigate with noisy diesel engines powered by air and stay underwater for a few days. Then, after being submerged for several days, the submarine was forced to surface. As a result, diesel submarines are most vulnerable while snorkelling and can be easily tracked. On the other side, submarines fueled by nuclear reactors do not require vast amounts of air to operate and can operate much more silently for months at a time underwater – and they can move faster while doing so.

Air Independent Propulsion (AIP) technology is revolutionizing the accessibility of extended diving and silent running submarine capabilities that were previously only available to much more complex, expensive, more significant, and louder nuclear submarines. There are now numerous AIP concepts in general, with fuel cell-based systems being a popular choice recently. However, the Swedish Gotland-class submarines deployed in 1996 were the first to employ an Air Independent Propulsion (AIP) system – specifically, the Stirling engine. Using liquid oxygen, a Stirling engine charges the submarine’s 75-kilowatt battery.

The Gotland Class can also operate as a traditional diesel-electric submarine by surfacing or snorkelling and using its standard diesel engines. It can also operate solely on battery power, reaching submerged speeds of up to 20 knots. The Gotland Class’s ability to patrol silently for weeks on AIP, run un-stealthily on standard diesel engines, or rocket through the water for shorter periods on silent battery power alone gives it tactical agility that the enemy finds challenging to predict.

The Gotland class has many other characteristics that make it proficient at evading detection. It is outfitted with 27 electromagnets designed to counteract its magnetic signature to Magnetic Anomaly Detectors (MAD). Its hull has sonar-resistant coatings, and the tower is made of radar-absorbent materials. Interior machinery is coated with rubber acoustic-deadening buffers to reduce sonar detectability. Thanks to the combined six manoeuvring surfaces on its X-shaped rudder and sail, the Gotland is also highly manoeuvrable, allowing it to operate close to the seafloor and pull off tight turns.

However, the primary concern of the US Navy is not the pursuit of the USS Ronald Reagan by HSwMS Gotland during the exercise. Instead, the main problem for the US Navy is that the Chinese Navy has AIP submarines and that these submarines pose a threat to aircraft carriers. China operates two types of diesel submarines powered by Stirling engines. Fifteen Type 039A Yuan class submarines have been produced in four variations, with over twenty more planned or under construction. Additionally, Beijing owns a single Type 032 Qing-class submarine capable of submerging for 30 days. It is reported to be the world’s largest operational diesel submarine, with seven Vertical Launch System cells capable of launching cruise and ballistic missiles.

A diesel sub will be most effective when ambushing a hostile fleet whose position has already been “cued” by friendly intelligence assets. The slow, sustained underwater speed of AIP-powered diesel submarines, on the other hand, makes them less than ideal for stalking prey across vast swaths of water.

The carrier task group failed to detect HSwMS Gotland illustrates that the US Navy must develop new methods to defend its surface assets, particularly the aircraft carrier, from Chinese submarines.

Check out Naval Library App to find out the specifications of the Gotland class submarines.