navalpost
Home Naval Articles How do Modern Warships Defend Themselves Against Torpedoes? 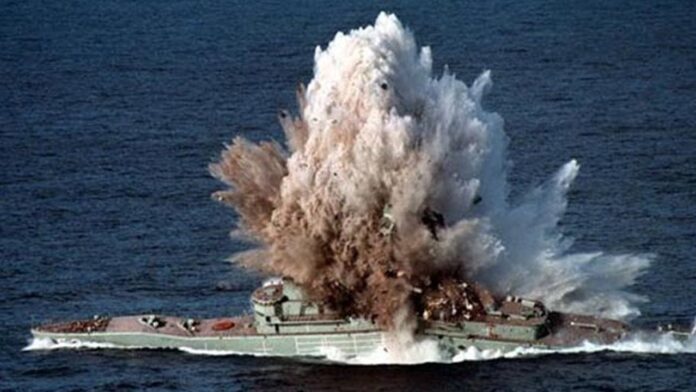 HWT typically launched from submarines at a large distance of 10,000-15000 m. They are quiet and radiate little noise; therefore, ASW forces must use active sonar for torpedo detection. Torpedo detection is difficult due to large launching distances and unfavorable sound propagation conditions, particularly in littoral waters.

The fact that very few countries have the decent capability to develop an effective torpedo defense and there is no single effective system deployed (both Hard Kill & Soft Kill) that can claim to be highly effective against a broad range of Torpedoes (Wake Homing, Active/Passive Homing, Straight Runners, Multiple torpedoes).

Torpedoes are becoming more dangerous day by day with new capabilities. Some of them do not explode until detecting the hull of the real ship. Most of them have re-attack capabilities. Like some missiles, they approach the ship with random movements like zig-zag in their terminal phase, making them harder to track or target.

A single submarine could also launch a flurry of the mini-torpedoes at a single surface or sub-surface target, which would help overwhelm its defenses. The attacker could layer the attack with smaller weapons and a standard heavyweight torpedo, as well.

To understand the torpedo countermeasures system, we should start with the features of modern torpedoes.

Straight Runners (Some navies still use them)

These HWT have no homing sensors. They are launched at Short to Medium ranges run in pre-designed patterns and don’t have the re-attack capability. In terms of acoustic signatures, they produce a high radiated noise level and are comparatively easy to detect. They can only be countered by maneuvers or hardkill defense. All nations have their own tactics for maneuvers.

In a typical engagement, the torpedo will run out wire-guided to the target’s general vicinity and then conduct a covert passive and after active search.

An acoustic torpedo is a torpedo that aims itself by listening for characteristic sounds of its target or by searching for it using sonar (acoustic homing). Acoustic torpedoes are usually designed for medium-range use.

Acoustic homing torpedoes are equipped with a pattern of acoustic transducers on the weapon’s nose. By process of phase delaying the signals from these transducers (i.e., a variation of acoustic signal sensitivity dependent on the noise energy incident angle), it detects the target angle. These sensor systems are capable of either detecting sound originating from the target itself i.e., engine and machinery noise, propellor cavitation, etc., known as passive sonar, or responding to noise energy reflections as a result of “illuminating” the target with sonar pulses, known as active sonar.

The torpedo is fired to cross behind the stern of the target ship through the wake; as it does so, it uses sonar to look for changes in the water caused by the passage of the ship, such as the small air bubbles.

When these are detected, the torpedo turns toward the ship then follows a zig-zag course, turning when it detects the outer edge of the wake to keep itself in the wake. This will eventually bring it to the rear of the ship, where its warhead can do the most damage to propulsion and steering.

The system is difficult to jam, though it can be distracted by other ships crossing the wake. The main disadvantage of wake homing is that the course taken to the target is non-optimal. The target is always sailing away from the weapon, requiring a fast weapon with a longer range than direct homing.

The most effective tactic is to keep moving. Never stop. Stay way out in deep blue ocean water and away from shore many hundreds of miles if possible. A US Navy carrier at 30 knots runs just 10 knots slower than a standard torpedo, but with a flight deck full of aircraft and personnel, pulling tight turns to dodge an incoming torpedo presents problems of its own.

Once the torpedo is launched, sonar tracking from ships and helicopters may manage to spot it in time to destroy it with anti-torpedo torpedoes or by maneuvering the ship away from any visible torpedo track.

If the torpedo is a homing type, then the latter won’t work, so other anti-torpedo measures have to be taken, such as towing a torpedo decoy behind the ship, fire expendable decoys, which makes a noise louder than the ship’s propeller noise to distract the torpedo and turn it on to the decoy.

Modern torpedoes detect the decoys after a while; therefore, the main aim is to keep the ship’s distance from the torpedo until its battery is dead/out of fuel. The new towed decoys are especially used against wake-homing torpedoes to trigger torpedo guns before reaching the ship.

The final line of defense is a very new weapon – an anti-torpedo torpedo. Basically, the ship fires a torpedo that’s intended to home in on the incoming torpedo and hopefully destroy it, or at least deafen its seeker.

Towed decoys employ both a broadband masker that generates more noise energy than the target ship and an active pulse transmitter that returns a torpedo’s active sonar ping at two to three times more amplitude than received. This attracts the torpedo to the towed decoy where it will circle until it runs out of energy.

The new systems like US AN/SLQ-25C and UK Ultra’s Sea Sentor use both towed and expendable decoys.

The countries are trying to develop anti-torpedo torpedoes. However, still, there is not any clear information that any country managed to be successful.

The US Navy’s Anti-Torpedo Torpedo Defense System trials ended because of uncertain reliability. The US removed the systems from the carriers on which it has been installed.

Russia’s Paket-E/NK anti-torpedo system is designed to engage torpedoes or submarines inside 800 meters. This fast-reacting countermeasure consists of an externally mounted rotary launcher of eight intercept devices, a Paket-E control system, and a Paket-AE sonar set. The system can automatically alert on an incoming torpedo, calculate its path and launch a torpedo disabling anti-torpedo. It provides ships with unique anti-submarine and anti-torpedo capability. This point defense approach is employed if traditional evasion is unsuccessful.

The other hardkill options are decoys with explosives. When the torpedo approaches the decoy, it explodes and neutralizes the torpedo. The Israeli Rafael’s SHADE system can be an example of this type of hard-kill capability.

Russia, China, and some other navies use anti-submarine rockets to provide a multi-layer defense against torpedoes. The system operates in conjunction with the ship’s sonar.

Check out Naval Library App to find out the specifications of all torpedoes and torpedo countermeasures system.