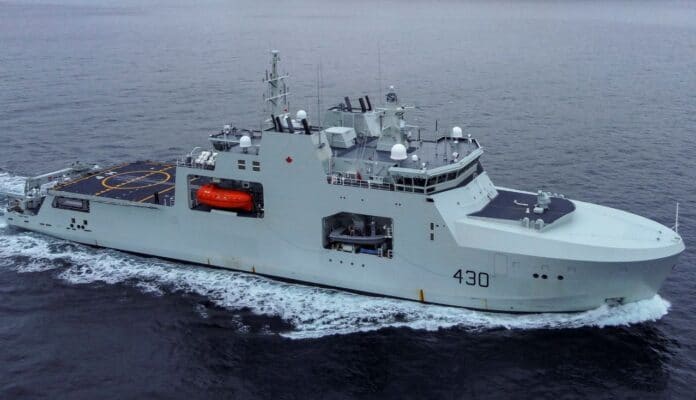 After a month of conducting cold weather and ice trials off the coasts of Northern Labrador and Nunavut earlier this year, Her Majesty’s Canadian Ship (HMCS) Harry DeWolf found itself warm waters trials near Puerto Rico in late April.

With the water temperature hovering at 29 °C and the outside air temperature at 35 °C, the conditions were perfect for the trials needed to test the ship’s systems in warmer weather alongside or at sea.

“The refrigerated spaces and the galley temperatures were checked each day while preparing meals. The main propulsion plant was tested at full speed over a period of four hours where the sea water cooling was checked periodically, as well as the temperatures of every engine space. Finally, all of the lifting appliances were tested and verified to be operational in extreme heat.”

“There were requirements to tune the HVAC system in different parts of the ship to ensure air flow was meeting specifications, and we as a ship’s company did our part by maintaining strict access controls to the upper decks to keep the hot air outside.”

While Harry DeWolf is an Arctic and Offshore Patrol Ship that will be used as an icebreaker in the North, Canada needs a Navy that can operate anywhere in the world.

“These ships need to be able deliver to the Canadian problem: extreme cold operations in Canada’s domestic north, but also anywhere in the world where the Canadian Government would need the Navy to assist,” explains Cdr Gleason.

He jokes that during the warm weather trials they didn’t see any polar bears, but they did see dolphins and flying fish. Sailors, he says, have more experience with the latter.

“Certainly hull interactions with ice has challenges that are unlike any other and completely unfamiliar to today’s sailors – operating in warmer weather was pretty ‘old hat’ and familiar ground to our sailors.”

During the trials, Petty Officer 1st Class Sophie Williams, Senior Naval Communicator aboard Harry DeWolf, was responsible for ensuring critical communications were maintained while at sea. However, she said her responsibilities change very little, no matter where the ship is in the world.

“There are always challenges maintaining communications while at sea. The extreme diversity of the locations created differing connectivity issues that kept the naval communicators busy.”

She adds that each trial Harry DeWolf completes is important, and the entire ship’s company is invested in completing them.

“Some of the major milestones have been incredibly rewarding and it’s nice to be able to say that we have accomplished firsts with Harry DeWolf that have been the culmination of my 30-year career.”

Master Sailor Robert Bourque, Integrated Platform Management System (IPMS) controls technician and electrical systems maintainer on board, says his role during the warm weather trials was to collect electrical and mechanical system data from the ship’s IPMS data recording server and to process that data into a readable report for analysis, supporting the trial agenda in any way possible.

He agrees that being aboard Harry DeWolf during both cold and warm weather trials has been a great opportunity.

“There have been some challenges along the way with the trials, but our outstanding crew always pulls together to get the job done to continue the trial program on schedule,” he says. “Participating in this program is definitely going to be a major highlight of my career and many stories that I will be able to tell in the future.”

Check out Naval Library App to find out the specifications of the HMCS Harry DeWolf.