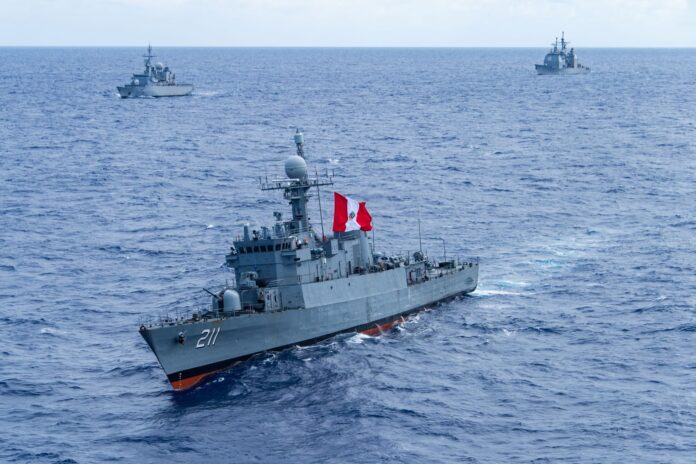 In 2015, Admiral Edmundo Devile, Commander in Chief of the Peruvian Navy, and Admiral Jung HO, Chief of Naval Operations of the Republic of Korea Navy, signed the documents for the transferring of the ROKS “GYEUNGJU” (PCC-758) to the Peruvian Navy. ROKS “GYEUNGJU” (PCC-758) had an important place in the Korean navy due to its successful activities during the infiltration incident of a North Korean submarine in 1996.

The Peruvian national flag was hoisted by the first time in the port of Jinhae, South Korea on June 1, 2016, and she renamed after Lieutenant Diego Ferré, a war hero who died at the Battle of Angamos during the War of the Pacific.

“B.A.P. FERRÉ” has conducted several important operations in the Peruvian Navy as well. She has executed several significant missions, such as maritime security operations, search and rescue duties, preserving the environment, and Counter Narcotics Operations in Peruvian waters. To give an example, she intercepted a Colombian vessel carrying 660 kg of drugs just a few months after being commissioned.

To date, the “B.A.P. FERRÉ” has participated in several international activities; such as UNITAS PAC, UNITAS LANT, SIFOREX, and RIMPAC and has proved its operational capabilities and professionalism in different sea conditions and areas.

With its operational capabilities, she will continue to fulfill the Peruvian Navy’s needs and support foreign policy.