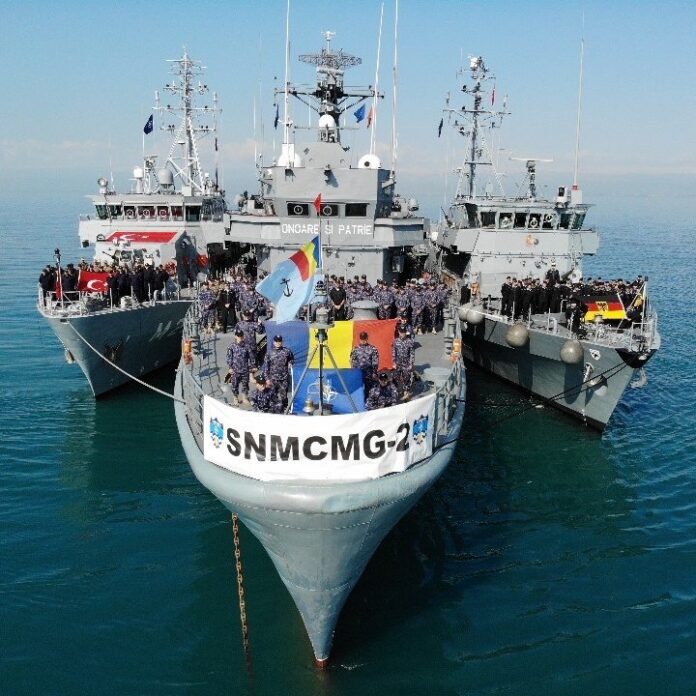 “By assuming the command of the Standing NATO Mine Countermeasures Group Two for the first time in history, Romania proved that it is dedicated and fully contribute to our Allied collective defence. The Group was able to contribute to the desired Allied state of readiness and to promote NATO’s values and image not only while running the regular schedule of operations but also while adapting to new challenges” said Commander Vlad.

Under Commander Vlad’s command, SNMCMG2 was able to successfully plan, organize and conduct training sequences, thus ensuring a high readiness state in the Black Sea and the Mediterranean. SNMCMG2 carried out a full spectrum of mine warfare, maritime traffic monitoring, as well as tasks in support of NATO Operation Sea Guardian and actions to deter potential threats against the Alliance.

‘’While in the challenging age of COVID-19, maintaining the readiness of NATO Response Force is even more crucial and demanding than ever, our goal to demonstrate the operational capability, strength, agility and resilience of NATO remains uninhibited” said the incoming Commander Dimitrios Katsouras, who will hold the command of SNMCMG2 for 6 months aboard the new flagship HS Aliakmon.

Commander Vlad’s command of SNMCMG2 was strongly influenced by the COVID-19 virus pandemic in terms of the risk of infecting crews aboard ships. Thus, protection and prevention measures were early consistently implemented. This put severe restrictions on the SNMCMG2 staff and the ships’ crews. But they not only managed to stay COVID free, but also kept moral and readiness high which is an admirable achievement.

“Indeed, this first Romanian command of SNMCMG2 will be something to be remembered not only as the first one but also as a very challenging one considering the severe operational environment we were in, imposed by COVID-19 pandemic. We all should be proud that these last six months proved us strong, committed, flexible and ready to adapt to any friendly or provocative environment, so our state of readiness is always safeguarded. Thank you to all of my team – crew members, staff and commanding officers, contributing nations, MARCOM and the Romanian Navy leadership for the outstanding effort, support and assurance. Good luck to the new command! Fair winds and following seas!” said Commander Vlad, looking back on this six-month deployment.