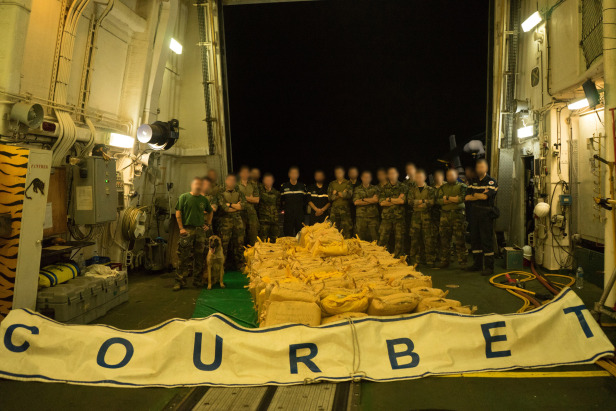 French frigate Courbet seized more than 3.5 tonnes of cannabis resin off the Gulf of Oman On Friday (December 13). FS Courbet thus achieves the most important French take for this year in this region.

The frigate has been operated under operational control of the commander of the Indian Ocean maritime zone (ALINDIEN), in direct support of the Combined Task Force (CTF) 150. (The CTF 150 is a coalition bringing together the navies of several countries to fight against illicit trafficking and activities linked to terrorism, and to guarantee the security of maritime areas.)

On the basis of information, the Courbet relocated a suspicious dhow sailing without a flag, and kept it in radar range for more than 36 hours, pending the transfer of narcotics on board by an accomplice ship. At around 1:00 a.m., the dhow suddenly headed south and the frigate set off.

His visiting team carried out a pavilion investigation, then detected the narcotics in a double bottom of the fuel tanks. In the balance 172 bales of cannabis resin of approximately 20 kg each were discovered. The drugs were seized, repatriated aboard the Courbet , weighed and sealed, then destroyed under the responsibility of the commander, and on the order of the ALINDIAN.

Florence Parly, Minister of the Armed Forces, congratulates the crew of the frigate Courbet for their seizure of more than three tonnes of cannabis off the Gulf of Oman and salutes “an impressive action by our sailors who carry loudly the values ​​of the France in this essential fight against drug trafficking, many of which have Europe as their final destination ”.

Departing on November 7 from Toulon, the Courbet relieved the anti-aircraft frigate (FAA) Jean Bart on November 23 as part of a French presence mission in the Arab-Persian Gulf whose purpose is twofold: to fight against drug trafficking while contributing to the protection of French interests in the region.

This year, French vessels carried out 9 seizures with a total of nearly 15 tonnes of illicit products in this area.