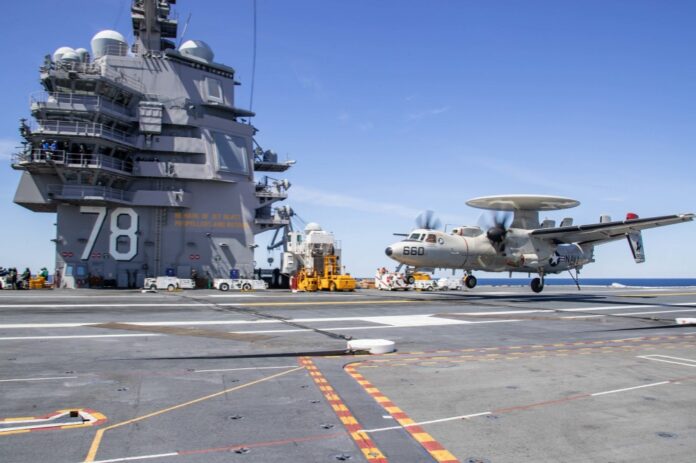 USS Gerald R. Ford (CVN 78) commenced its second round of CQs for Fleet Replacement Squadron (FRS) pilots May 10, with a healthy and mission-focused crew.

Ford, operating at-sea at the same time as four other U.S. aircraft carriers, is conducting its fourth independent steaming event (ISE) since commencing an 18-month Post Delivery Test and Trials (PDT&T) phase of operations in November 2019.

While underway Ford will conduct FRS CQ with pilots from Airborne Command and Control Squadron (VAW) 117 and VAW-120, and Strike Fighter Squadron (VFA) 106.

“Our crew is tough and has adapted quickly to the acute changes we’ve made to our operating procedures and day-to-day life onboard,” said Commanding Officer Capt. J.J Cummings. “Their resiliency, their grit allows us to get underway and accomplish the mission,”

“Getting underway knowing that our crew will be generating readiness for the fleet, along with the four other carriers at sea, is extremely rewarding,” Cummings said. “We are also proud that several of these aviators who carrier qualify on our ship will be heading over the horizon soon to join deployed carriers throughout the world.”

“The E-2D is our latest and greatest aircraft that has a lot of good equipment and a really good radar that’s going to allow us to see our enemies at distances that we really haven’t seen before,” said Lt. Cmdr. Jeremiah Caldwell, a pilot assigned to VAW-117. “The training process for us is about three years just to get to the fleet, so we are here aboard Ford training fleet aviators that are making the transition from the Charlie to the Delta.”