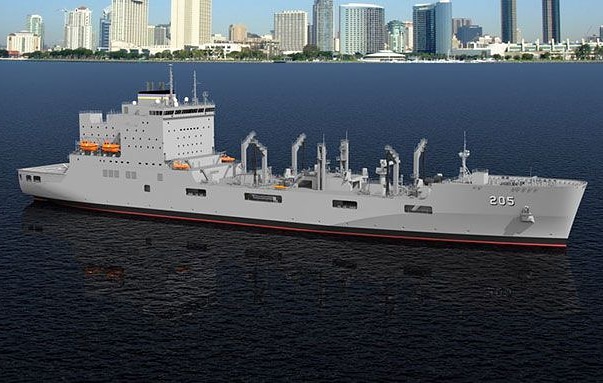 A ceremony was hosted at General Dynamics-National Steel and Shipbuilding Company (GD-NASSCO) shipyard to celebrate the start of construction of the Navy’s first John Lewis-class Fleet Replenishment Oiler,
the future USNS John Lewis (T-AO 205), Sept. 20.
In developing the T-AO 205 design, the Navy worked closely with industry partners to conduct trade off studies that matured the government-developed ship specifications.  The results of the trade-off studies were then combined into integrated ship designs.  GD-NASSCO was later competitively awarded a Fixed Price Incentive block buy contract for the detail design and construction of six T-AO 205 Class Fleet Replenishment Oilers.
The John Lewis-class ships are based on commercial design standards and will recapitalize the current T-AO 187 Class Fleet Replenishment Oilers to provide underway replenishment of fuel to U.S. Navy ships at sea.
These ships are part of the U.S. Navy’s Combat Logistics Force and will become the backbone of the fuel delivery system.
John Lewis will be operated by the U.S. Navy’s Military Sealift Command and is the first ship named after the civil rights leader and Presidential Medal of Freedom recipient.