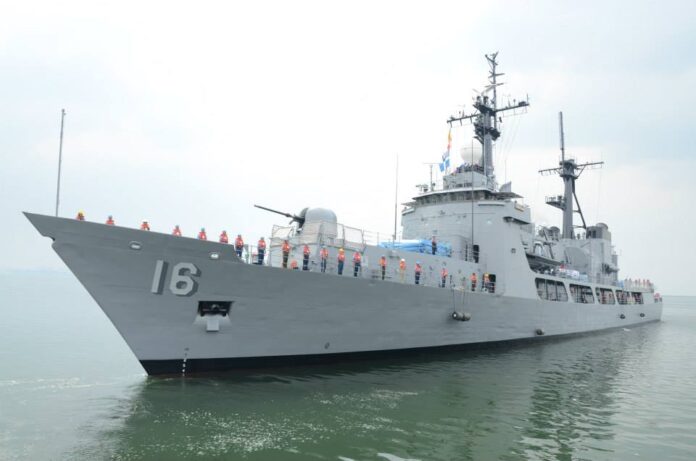 The Philippine Navy (PN) has confirmed the fire incident that took place onboard BRP Ramon Alcaraz (PS16) on 7th May just a few hours after it departed Port Cochin of India bound for Manila.

Naval Public Affairs Office Acting Director of PN said an initial investigation showed that the fire that broke at the main engine room was put out in 10 minutes but injured two personnel with second-degree burns and caused minor damage in some equipment.

“Per our estimate, she will stay there for an additional 21 days to complete the repairs,” Chief of Philippine Navy Vice Adm. Giovanni Carlo Bacordo said in an interview a domestic channel.

He said the downtime could have been shorter if not for the lockdown implemented in India due to the coronavirus pandemic.

“If not for the quarantine situation…maybe this will only go on for one week. Based on the timeline given to us, she will complete her repairs in 21 days, including the endurance tests,” Bacordo added.

The U.S. Navy’s Naval Sea Systems Command will assist in repairing the BRP Ramon Alcaraz because it was procured from the U.S.

The ships visited India last week to pick up donated face masks and tourists who were stranded by the travel bans enforced to contain the coronavirus disease (COVID-19) pandemic.

BRP Ramon Alcaraz (PS-16) is an offshore patrol vessel in the Philippine Navy and the second ship of the Gregorio del Pilar class. From 1968 to 2012, she was known as USCGC Dallas and served the United States Coast Guard as a high endurance cutter. She was decommissioned on 30 March 2012 and acquired by the Philippines.

The overall length and beam of the vessel are 115.2m and 13.1m respectively, and the hull draught is 6.1m. With a displacement of 3,390t, the class can accommodate 162 personnel, including 19 officers.

The flight deck at the stern of the frigate is intended to support take-off and landing manoeuvres of one type AW-159 Wildcat helicopter. The vessel also features a retractable hangar.

The Philippines’ modern Gregorio del Pilar-class frigates are armed with two Mk 38 Mod 2 auto cannon systems, which are the improved versions of Mk38 M242 Bushmaster guns, for protection against surface threats in both day and night conditions.

An Mk75 76mm Oto Melara gun mounted in the bow is intended to offer protection against surface and air targets.