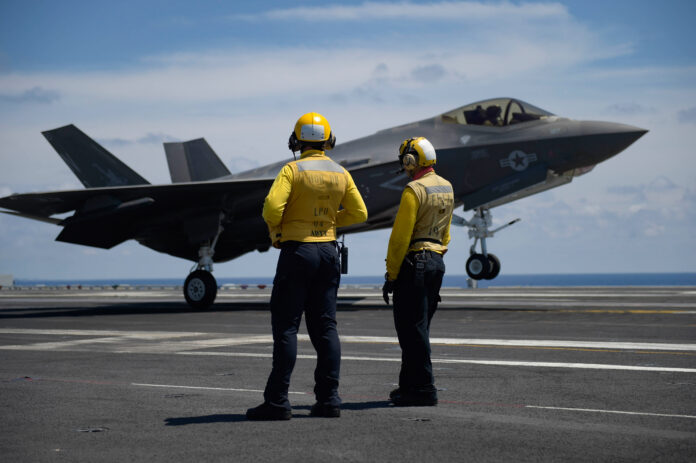 F-35C Lightning II aircraft from Strike Fighter Squadron 125 are conducting their Operational Test-1 (OT-1) aboard the Nimitz-class aircraft carrier USS Abraham Lincoln (CVN 72). OT-1 evaluates the full spectrum of the F-35C’s suitability for operation within a carrier air wing and mission effectiveness to the maximum extent possible.
Evaluators have been assessing the suitability of the F-35C aboard carriers by defining how well it performs with other aircraft and incorporates into an air plan, monitoring maintenance and identifying its logistics footprint.
In addition to assessing the suitability of the F-35C on a Nimitz-class class aircraft carrier, OT-1 evaluators observed the effectiveness of the F-35C in real-world scenarios.
Previously, F-35C and F/A-18 Super Hornet pilots have only conducted carrier qualifications together, so OT-1 marks the first time the F-35Cs have joined a carrier air wing to perform in a cyclic operations environment.
During cyclic operations, aircraft simulate missions, practice aerial maneuvers and take off and land continuously with brief pauses to allow for maintenance, fuel and ordnance changes.
Aboard Abraham Lincoln, the F-35C has been flying cyclic operations with F/A-18 Super Hornets, E-2D Hawkeyes and EA-18G Growlers, conducting missions it would execute in combat if required. The addition of the F-35C brings advanced capabilities that transform the way an air wing conducts operations.