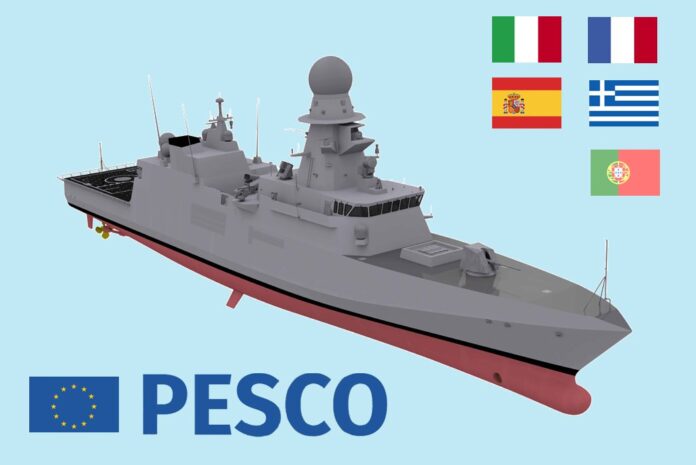 EDA’s Steering Board recently approved the launch of a specific EDA ad hoc project which will contribute to the implementation of a Permanent Structured Cooperation (PESCO) project aimed at developing a European Patrol Corvette. Italy, which leads a group of four PESCO participating countries involved in EPC (together with France, Spain and Greece), had requested the Agency’s support for moving this ambitious project forward, EDA announced with a press release.

Part of the third batch of PESCO projects approved in November 2019, the project aims at designing and developing a new class of military ship, named “European Patrol Corvette” (EPC), which will host several systems and payloads able to accomplish a large number of tasks and missions in a modular and flexible way. The EPC will provide valuable capabilities in the areas of maritime situational awareness, surface superiority and power projection. The participating Member States aim to produce their first corvette prototype in 2026-2027.

The EPC is envisaged as a common platform, a shared baseline, which can be customised as needed by participating Member States according to their national needs and specifications. The overall displacement is expected to be no more than 3,000 tonnes, which will allow the ship to operate from minor harbours (draft less than 5.5 meters). The length of the ship, to be equipped with diesel and/or electrical engines, should not exceed 110 meters.

The ship will be based on an open plug-and-play architecture which will facilitate the versatility of response in the framework of EU CSDP operations and will provide a quick reaction capability, applicable to a broad range of scenarios.

The Agency’s new project will support the EPC PESCO project implementation through the development and adoption of Common Staff Target (CST), Common Staff Requirements (CSR) and a Business Case (BC). The objective of these documents, which are an indispensable step for a follow-on phase of the EPC PESCO project, is to shape the common core part and identify specifications and requirements that would be compatible with the modularity concept of the military ship.

The Agency will also support the governance body of the EPC project. With its expertise in project management and harmonisation of capability requirements, EDA will be able to provide valuable assistance in these domains. The industry is not participating directly in this EDA project but may be consulted if deemed necessary by the contributing Member States.