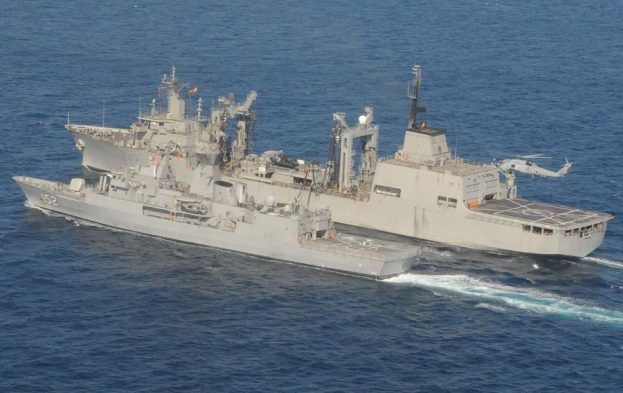 EU NAVFOR’s Spanish Warship ESPS Patiño has further supported Combined Maritime Forces by rendezvousing with an Australian and Pakistani Warship and conducting Replenishment at Sea (RAS).
Her Majesty’s Australian Ship Warramunga of CTF150 and Pakistan Navy Ship Aslat of CTF151 took on board a total of 390 cubic metres of fuel essential for the continuation of Maritime Security in the region.
ESPS Patiño has been the lead Warship of EU NAVFOR conducting counter-piracy operations off the Somalia Coast since 6th December 2017, assisting international merchant ships as they transit the important sea lanes around the Horn of Africa. Her Seahawk SH-60 Helicopter plays a vital role in searching and interdicting pirate activity, and is also useful for the rapid transportation of personnel and vertical replenishment between ships as required.
This reinforces the recent meeting between the Operational Commander of EU NAVFOR and the Commander of CMF in Bahrain, where they agreed to promote new levels of cooperation in the international fight against piracy and maritime security.