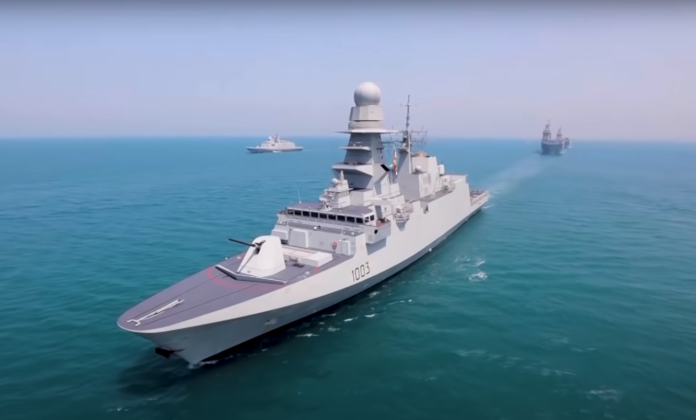 The two FREMM frigates being transferred to the Egyptian Navy were the last two Bergamini-class frigates built by Fincantieri for the Italian Navy. In 2020 Italy has sold these vessels to Egypt, which were in the production line. The deal also involved other military equipment and was worth 1.2 billion Euros.

Bernees was originally constructed as the Carlo Bergamini-class Emilio Bianchi before being acquired by Egypt and being renamed.

The arrival of the “Bernees 1003” is announced by Egytian Ministry of Defense by a Youtube video. In the video, there are 2× Mistral LHDs, 2× FREMM Bergamini-class frigates, 2× Oliver Hazard Perry-class frigates, 1× FREMM Aquitaine-class frigate, 2× Gowind-class corvettes, 3× Type-209/1400mod submarines and 2× Type-033 Romeo-class submarines.

Bernees (Carlo Bergamini-class Emilio Bianchi) was launched on 25 January 2020 at the Fincantieri plants in Riva Trigoso.  On 24 February 2021, she left La Spezia to undergo her first sea trial. The vessel was commissioned on April 13, 2021.

Check out Naval Library App to find out the specifications of the FREMM frigates.