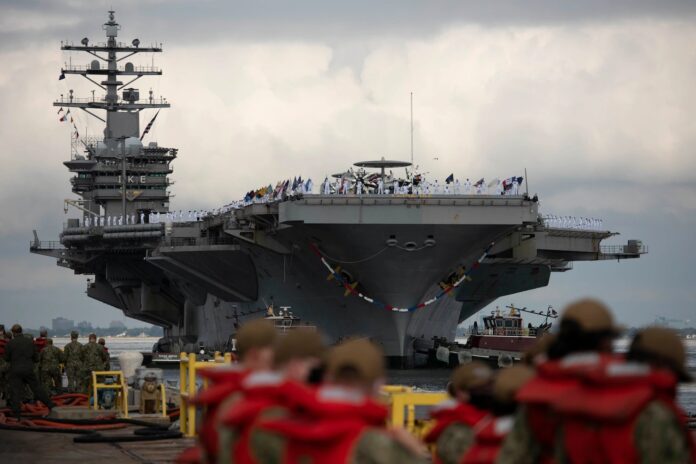 As the COVID-19 pandemic spread across the globe, IKECSG continued operations to maintain maritime stability and security and ensure access, deter aggression, and defend U.S., allied and partner interests.

“Words cannot express the admiration I have for each and every Sailor onboard. These young men and women were thrust into a situation no one could have predicted and they responded as only Navy Sailors can – they adapted and overcame the adversity. I witnessed their excellence day in and day out as they accomplished repairs never before attempted at sea,” said Capt. Kyle Higgins, Ike’s commanding officer. “I am deeply humbled to have the privilege of working alongside them. They are what make our Navy the greatest fighting force the world has ever seen.”

While in U.S. 5th Fleet, Vella Gulf, James E. Williams, Stout and Truxtun participated in Operation Sentinel, providing freedom of navigation and the free flow of commerce in and out of the heavily transited Strait of Hormuz and Strait of Bab el Mandeb. These operations were instrumental in maintaining stability throughout the region.

“I could not have asked for greater effort from the CVW-3/IKE team during this challenging deployment. The professionalism of my aircrew and the sailors sweating through seven months of no port visit operations was simply eye-watering,” said Capt. Trevor Estes, commander Carrier Air Wing 3. “I truly hope that every member of this team has the opportunity they deserve to relax and enjoy time with family and friends post deployment. In the end, I want the team to know how thankful I am for them every day.”

IKECSG ships each sailed more than 60,000 nautical miles, operating dynamically through multiple exercises with allies and partners and dual-carriers operations with the French aircraft carrier Charles de Gaulle and USS Harry S. Truman (CVN 75). The ships completed multiple strait and choke point transits, including the Strait of Gibraltar, the Suez Canal, Strait of Hormuz and Strait of Bab el Mandeb.

Demonstrating resiliency and self-sufficiency, Sailors from across the strike group and air wing made several complex repairs to vital equipment and systems, correcting more than 500 category 3 and 4 CASREPs, that would normally be conducted at depot level, or require onboard technical assist visits.

“Our Sailors inspire me with their grit, pride and professionalism. They are the back bone of IKE Strike Group’s warfighting excellence,” said Rear Adm. Brendan McLane, commander, Carrier Strike Group 10. “IKE CSG Sailors demonstrated resiliency in the face of adversity by their ingenuity, flexibility, and self-sufficiency. They were a testament to the strike group’s ability to adapt and overcome the tough challenges of this deployment.”