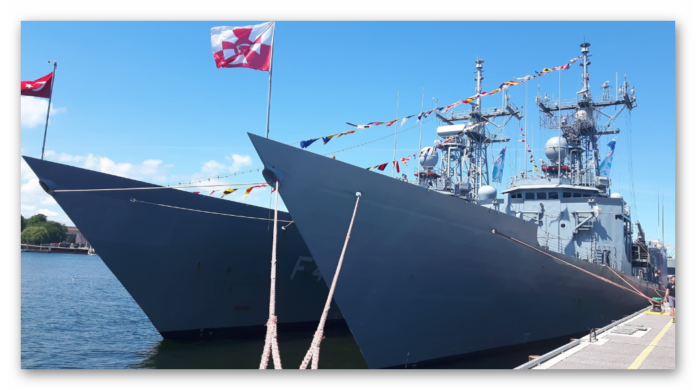 After finishing BALTOPS 2019 exercies, Kiel base of Germany hosted NATO Maritime Group One (SNMG1) ships. While moored at port, two Oliver Hazard Perry Class frigates, General Kazimierz Pulaski from Poland and TCG Gokova from Turkey. Though both ships are same class (Turkish navy names them as Gabya class) there are some differences draws our attention.

According to specialists and navy ensthusiasts the most important disadvantage of O.H.Perry class frigates is having only one guided missile launching system (GMLS). Different from other kinds of frigates, both Harpoon SSM and SM-1 SAM is launched from Mk13 GMLS. If a defect occurs on MK13 GMLS, ship cannot launch not only Harpoon, but also SM-1. Turkish navy seems to solve this disadvantage by adding a vertical launching system (VLS) on the bow deck. With this upgrade, Turkish Gabya class frigates gained the ability to launch 32 RIM-162 Evolved Sea Sparrow Missile (ESSM) SAM.

There’s also a modernization for landing helicopters, Aircraft Ship Integrated Secure and Traverse System (ASIST). Before upgrading the ship with ASIST, O.H.Perry class frigates were unable to carry S-70B helicopters at their hangars. Now they cand land helicopters more securely and with a rail at astern deck, they can drive it to hangar.

Because of this issues we can name Gabya Class frigates of Turkish navy as “Upgraded O.H.Perry”.