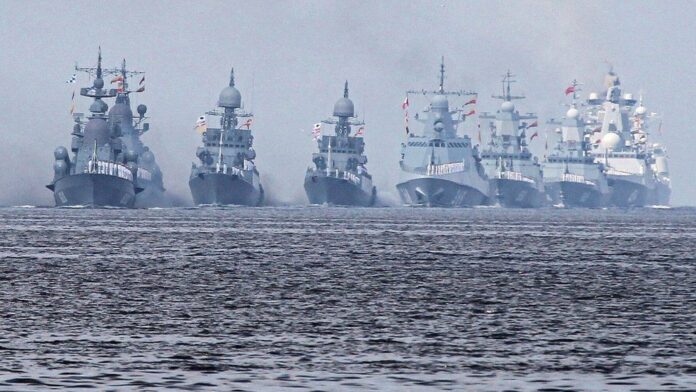 According to the reports of Russian Baltic Fleet’s office on 27th November, a group of the Baltic Fleet’s warships led by the guard ship Yaroslav Mudry has passed through the Suez Canal and entered the Red Sea for a long-distance deployment in order to participate Indra-2019 Russian-Indian drills and support counter-piracy missions at the Gulf of Aden.

The warships embarked on their long-distance deployment from the Baltic Fleet’s main naval base of Baltiysk in the westernmost Kaliningrad Region on October 1st and headed for the Indian Ocean to take part for the first time in the naval component of the Indra-2019 Russian-Indian drills that will run on December 10-19. The warships are on their long-distance deployment in compliance with the plan of the Russian Defense Ministry’s international activity this year.

Russia’s tendency to show presence at all seas :

Russia is a super-power that has great interest at whole world, like its rival, the U.S. Russian ships had been observed at almost everywhere in the world for many decades.  But this desire was interrupted after the cold war and Russian ships couldn’t be seen at high seas often. During this period, like the whole state, the Russian navy tried to recover itself in accordance with the Russian economy. For about a decade, with the vision Putin influenced from legendary Russian Admiral Sergey Gorshkov, the Russian government launches modernization projects and investing more funds to restore naval forces. As a result of this policy Russian warships has been continuing to show presence at oceans.

While Marshall Ustinov cruiser is conducting trilateral exercises with South Africa and PLA navies in the vicinity of Cape Town, this task group led by Yaroslav Mudry is proceeding to the Gulf of Aden to support counter-piracy ops and attend a large scale exercise with India at Indo-Pacific region. When tension is more than expected not only at Baltic but also Pacific, why did Russia send ships of to the Gulf of Aden? Just to support counter-piracy ops and conduct exercises? Very optimistic point of view.

Russia tends to return to the times of Admiral Gorshkov. As known commonly, the famous Soviet Admiral, Sergey Gorshkov’s concept was “Great powers need great navies”. He always wanted to set up a “Blue Water Navy”, because he knew clearly that the way to be a global power needs to have a functional and powerful navy. His strategic thinking has reemerged as the intellectual foundation for Russian sea power. Russian leaders seek to gain prosperity, security, and influence from maritime commercial enterprise and a navy with global reach.

The “new char”, Vladimir Putin is influenced by Admiral Gorshkov and seems eager to follow his way. Because navy is a diplomatic tool for Putin so as to bring all nations together at the same axis with Russia. To find a new market is vital for Russia to encumber the economy from the dominance of natural gas and oil, especially Africa continent and indo-pacific region are consideres as profitable markets for Russia.

As we stated above, Russia is sending a naval power thousand miles away from the homeland, because they have enough naval capacity to cover not only security areas for the homeland but also showing presence at high seas. This shows us that the decision-makers of Russian politics are devoted to two main doctrines of Gorshkov ;

– Having a great naval power

In order to have a great naval power which can support Russia’s political targets, Russia has been improving naval capabilities by building new warships and modernizing older ones. Contrary to older cumbersome warships, with modern projects like Grigorovich and Gorshkov class frigates Russian navy has been transforming into a contemporary look. Moreover, the Russian defence industry is empowering the fleets with super quiet Improved Kilo-II class diesel-electric submarines. The Russian defence industry has been working in a high performance, so that, two nuclear submarines are planned to be delivered to Russian Navy in 2020. Russia doesn’t neglect to show muscles when they have a chance. Especially, hitting ISIS targets with Kalibr missiles launched from Caspian and Mediterranean seas emerged a big interest over the Russian Navy and its improvement. We also saw the naval power at the Russian Naval Parade which was conducted on 28th July 2019.

As a part of the Blue Water Navy concept, Russian warships have been conducting drills and wrapping up port visits transoceanic countries. Especially warships belong to Baltic and Pacific Fleets visited Mediterranean (Turkey, Greece, Algeria etc.), African (South Africa etc.) and Indo-Pacific (Brunei, Myanmar etc.) countries in order to improve relationships and cooperation at defence issues. We see more Russian effect at oceans year by year and of course, this improvement is annoying for the U.S. who has a big interest at every sea of the world in accordance with the doctrine of Alfred Mahan.

The critism : Does the current course allow Russia to achieve Gorshkov’s dream?

Till this paragraph, I tried to explain the mentality of Admiral Gorshkov and improvements of Russian Navy in recent years. Dream of Admiral Gorshkov is not easy to reach. First of all, maintaining the fleet around the world is quite expensive to afford. Moreover, the mentality should manage all possibilities to support the fleet anywhere of the world.

Russian navy commonly visits other countries with a warship (cruiser, destroyer, frigate) accompanied by support ships and tugs. This force composition is a bit interesting. Developed navies make such activities either with a task group or a single combatant. When we see a Russian destroyer deploying transoceanic regions with a tug and support ship, a question comes to our mind, “Why”. Does Russian Navy doesn’t believe that the destroyer could complete the mission alone? Or, doesn’t Russia have a sufficient logistic system to support ship at overseas?

Being a global naval power requires an international logistics system in order to support ships anywhere of the world. To establish logistics chain, the global power needs overseas bases and bases of allies. For example, NATO has NAMSA (NATO Maintenance and Supply Agency) organization for supporting ships of allies anywhere of the world. The. U.S. Navy can use many bases around the world, the bases accredited to NATO and other allies like Bahrain, Kuwait, Brasil, Cuba etc. China newly built a modern base at Djibouti. As far as we know, Russia’s only naval base abroad is at Tartous base of Syria. The giant navy of Russia surely needs more bases and facilities to assure enough support.

Besides the developments at Russian Navy, there are critical problems in some areas. For example the AIP (Air Independent Propulsion) problem of Lada Class Submarines causes Russia to fall behind in AIP technology. The Project 677 program did not deliver Russia a vessel with an AIP system as had originally been envisioned. Construction of the first submarine (B-586 Kronshtadt) stopped due to multiple major issues. Such a super-power should have been resolved the issue years before, they are a bit late for AIP technology. Moreover, Russian diesel-electric powered submarines are cruising on the surface mostly. A submarine’s default cruise method is underwater, is there a trust problem that they are observed at surface mostly? After the accidents occured underwater, is there a specific order given by Russian Navy to cruise at surface when it’s not necessary to dive? Of course, these are only questions we wonder.

Russia has only one aircraft carrier, the Admiral Kuznetsov, which was damaged by a crane when the dry dock where it was undergoing a refit sank. Though Russian officials insist the damage is “not critical” but the 70-tonne crane caused a gash on the Kuznetsov’s deck of up to 5m (16ft), but she is still out of service and is being overhauled at a floating dock near Murmansk. Aircraft carriers are prestige symbols of super-powers, with Kuznetsov, Russia seems to be out of the league.

Consequently, Gorshkov’s dream requires a giant naval power that can operate anywhere of the world at any time. But this dream requires a really big defence economy, sustainable and efficient logistic system, overseas bases, active aircraft carriers, high technology assets above the world average etc. Though Russia has a great navy which is equipped with strong missiles, they have a long way to go to reach Admiral Sergey Gorshkov’s dream.