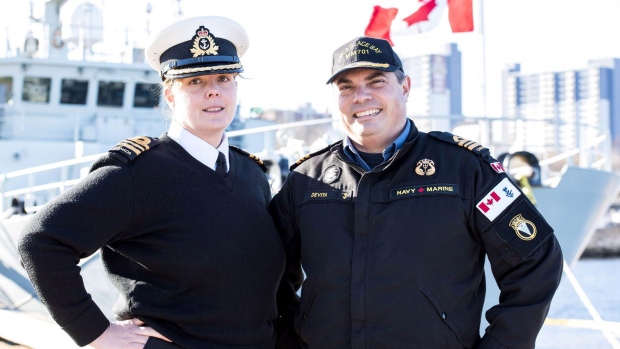 While most couples share a home and a bed, Nova Scotia’s Chris and Victoria Devita also share a warship.
The lieutenant-commanders made Canadian Naval history this year as the first couple to have commanded the same vessel, HMCS Glace Bay.
“It wasn’t planned but it’s a happy coincidence,” Victoria told CTV Atlantic during a tour of the ship, which specializes in counter narcotics, mine clearance efforts and arctic patrols. “I was actually very proud of (Chris). He’s been looking forward to his own command for quite a while.”
Victoria commanded the HMCS Glace Bayfrom 2013 to 2015, and Chris took over this August. Though Victoria was proud to have her husband as a successor, she also felt a little protective of the ship.
“The first thing I say is ‘Congratulations — don’t scratch my paint,'” she said, playfully pointing out a fabric tear on a chair onboard. Chris shrugged it off. “Yeah, what are you gonna do?” he laughed.
The couple does agree they’ve been married for 20 years and have two “resilient” children, Kassan
dra and Alexander. With two parents in the Navy, they’re sometimes apart from mom and dad for long stretches, sometimes both at once. That’s when their support networks step in. “We’ve relied on family, a couple of calls to grandma and grandpa to come in and help out,” Chris said.
As for their roles at home, Chris jokes that it’s just a “theory” they share the same rank in the household.
“I still think she’s the boss.”