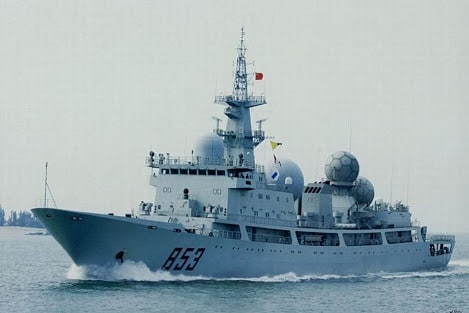 The Australian Defence Force is closely tracking a high-tech Chinese spy ship as it makes its way towards Australia ahead of this month’s Talisman Sabre war games on the Queensland coast. “There is [an AGI ship] north of Australia at the moment,” Chief of Defence Joint Operations, Lieutenant General Greg Bilton said at the Talisman Sabre launch in Brisbane. “We’re tracking it. We don’t know yet what its destination is, but we’re assuming that it will come down to the east coast of Queensland, and we’ll take appropriate measures in regards to that. “It is international waters, they have the right to sail there.” According to the Australian ABC they are preparing for the imminent arrival of the Auxiliary General Intelligence (AGI) vessel, which is expected to closely monitor the massive biennial joint United States-Australian exercises from just outside Australian territorial waters.

On Saturday night, the Type 815G Dongdiao-class electronic surveillance ship was believed to be north of Papua New Guinea, having begun its voyage south towards Australia late last week.

The AGI is fitted with advanced communications systems designed to eavesdrop on other militaries.

Up to 25,000 military personnel, mainly from the United States and Australia, are taking part in this year’s activity, which is focused on the planning and conduct of mid-intensity “high end” warfighting.