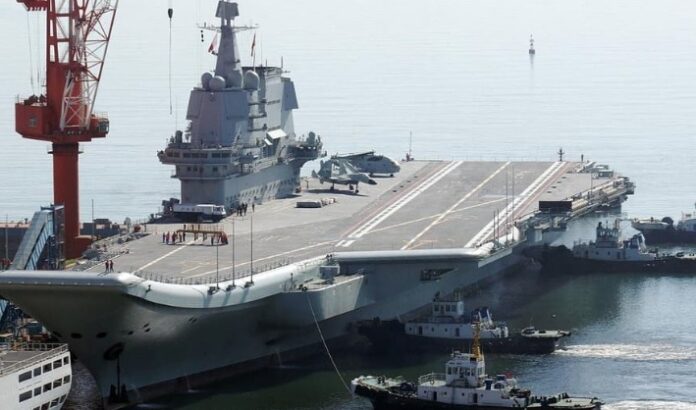 The Chinese People’s Liberation Army Navy’s (PLAN) second aircraft carrier, the first domestically-built aircraft carrier, the Type 002 (CV-17), is being prepared for her commissioning ceremony following the successful completion of its eight round of sea trials, according to local media reports on 30th October.

The second aircraft carrier is moored at the Dalian shipyard in the northeast Liaoning province after she returned from its eighth sea trial. As the ship first set out on its eighth sea trial, the voyage would likely serve as an examination of the warship’s readiness for final delivery, and that they expected the ship to be commissioned into the Chinese navy this year.

The ship was launched in April 2017, and began sea trials one year later in April 2018. Recent pictures of 002 from May this year have revealed tire marks on the landing strip, indicating that aviation trials with fixed-wing aircraft (J-15s) have begun.
Type 002 is a ski jump-equipped carrier derived from the design of CV-16 Liaoning. The ship enjoys various modifications from Liaoning, such as a significantly redesigned island and overall smaller island footprint, as well as redesigned, larger weapons elevators.

Similar to Liaoning, 002 is only capable of accommodating ski jump-launched J-15 fighters and helicopters at this time.