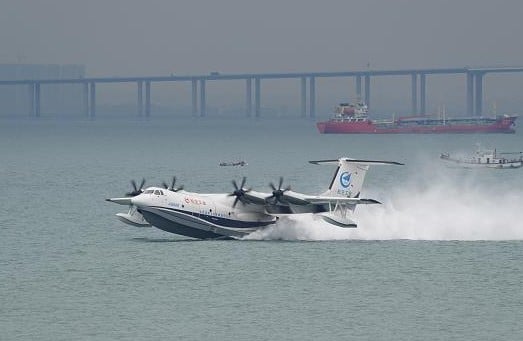 The aircraft took off from the sea off Qingdao at 10:18 a.m. and completed the test flight after flying for about 31 minutes, said state-owned Aviation Industry Corporation of China (AVIC).  This flight is seen as a major step forward of the AG600 large amphibious aircraft project.

Codenamed “Kunlong,” the AG600 is designed to be the world’s largest amphibious aircraft. Its development represents a Chinese breakthrough in this field.

The multi-tasking amphibious aircraft model is designed to feature high speeds, accessibility and good maneuverability. It is capable of serving in various missions including forest fire fighting, water rescue and maritime rescue, according to the AVIC.

The AG600 conducted its maiden flight in December 2017,and completed its first takeoff and landing on water in October 2018.