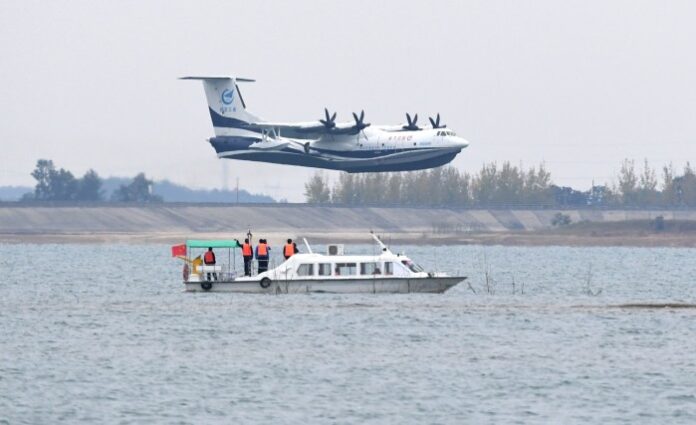 China’s independently-developed large amphibious aircraft AG600 completed its first water takeoff and landing in the city of Jingmen in the central province of Hubei on Saturday (Oct.20) morning.

The AG600, codenamed Kunlong, is designed to be the world’s largest amphibious aircraft. It completed its maiden flight in December 2017.

At around 8:51 a.m., the plane took off from the surface of a reservoir near Zhanghe Airport of Jingmen under the command of captain Zhao Sheng and his crew. It landed smoothly and steadily on water after a 14-minute flight.

Developed by Aviation Industry Corporation of China, the aircraft is powered by four domestically designed turboprop engines and is roughly the size of a Boeing 737. It has a maximum takeoff weight of 53.5 tonnes.

The aircraft is designed for both land and water takeoffs and landings. The lower part of the aircraft body is designed as a “V” structure to improve its anti-wave ability.

When used to help put out a forest fire, it is able to collect 12 tonnes of water at a time and make multiple trips to fetch water.

The aircraft can carry out sea rescue operations under complex meteorological conditions and can withstand two-meter-high waves. It is capable of carrying 50 people during a maritime search and rescue mission. It also provides support for China’s marine monitoring and safety patrol.