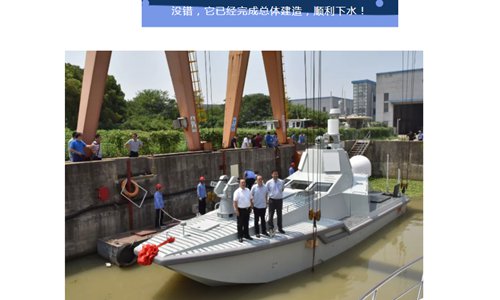 According to Chinese domestic media, China has launched a world-leading unmanned warship on 21st August, with its developer claiming the vessel is combat-ready.

Jointly developed by No. 716 and No. 702 research institutes under the state-owned China Shipbuilding Industry Corporation (CSIC), the “JARI multi-purpose unmanned combat vessel” held its launch ceremony at an undisclosed location, according to a statement the No. 716 Research Institute of CSIC released on its WeChat account on 21st August.

Announcing JARI’s combat-readiness immediately after its launch is also an indication of how mature the technologies used on the ship are, a military expert who asked not to be named told the Global Times on Thursday.

It will still need further tests to unlock its full potential of being a fully autonomous combat drone ship, according to the statement.

The ship has a length of about only 15 meters and a displacement of 20 tons, but is capable of conducting air defense, anti-ship and anti-submarine missions thanks to a phased array radar system, vertical-launched missiles and torpedoes, China Central Television (CCTV) reported in February, when a model of the JARI was exhibited at the 14th International Defense Exhibition and Conference (IDEX) in Abu Dhabi.

Some military observers called the ship an unmanned “mini Aegis-class destroyer” because of its radar and missiles.

The JARI can be remotely controlled, but also uses artificial intelligence to autonomously navigate and undertake combat activities once it receives commands, the CCTV report said.

The drone ship could either work stealthily alone or form a swarm with others to become a formidable power, analysts said.

A CSIC representative told CCTV that the ship has garnered a lot of attention from military representatives from many countries while it was on display at IDEX.