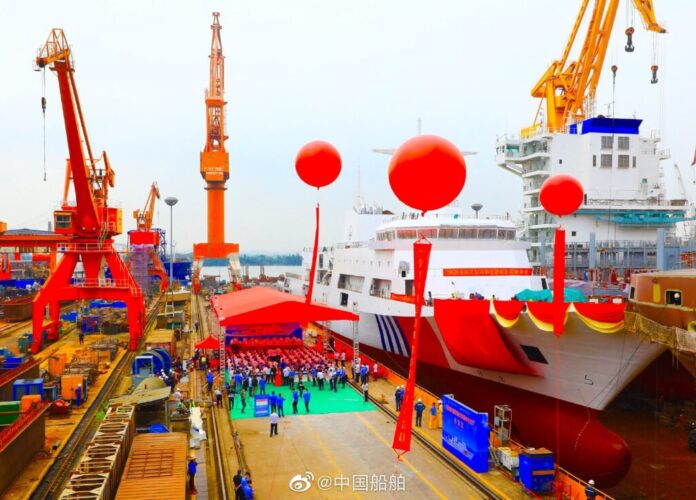 According to the local sources, China has launched its largest patrol vessel Haixun 09 at Guangzhou Wenchong Shipyard on 29th September. The ship is expected to serve as an important platform for law enforcement, emergency coordination and command and pollution prevention, the administration said in a statement.

The 165-meter maritime safety patrol vessel has a displacement of 10,700 metric tons and speed of more than 25 knots (46 kilometers per hour), said Yan Peibo, the ship’s chief construction engineer.

The ship has a helicopter landing pad and a data center with multiple sets of satellite communication systems, including China’s Beidou Navigation Satellite System. The ship’s construction started in May 2019.

It will also be an important tool for emergency management and cooperation in the global maritime safety sector, he said. Plans also call for expansion of the maritime patrol fleet capable of long-range, deep-sea operations by banking on technological innovation.

Haixun 09 has a smart engine room system capable of real-time monitoring of the main propulsion system and power generators. The ship also uses low-sulfur fuel and has a system to remove nitrogen oxides, often found in engine exhaust.

China currently has in service three maritime safety patrol vessels with a displacement of over 3,000 metric tons.