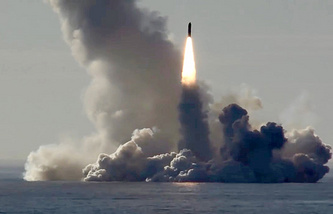 The D-30 missile system including R-30 Bulava intercontinental ballistic missile, has been accepted for service by the Russian Navy following successful tests, according to the Russian TASS.

The R-30 Bulava (NATO reporting name: SS-NX-30) is a Russian sea-based intercontinental ballistic missile making part of the D-30 launch system. It is designed as armament for Project 09550, 09551 and 09552 Borei and Borei-M strategic missile-carrying underwater cruisers. The Bulava ICBM was developed by the Moscow Institute of Thermal Technology (the Moscow Institute of Thermal Technology Corporation). The project’s chief designers were Yuri Solomonov (until September 2010) and Alexander Sukhodolsky.

Since 2005, about 30 test launches of the R-30 missile were carried out and about a third of them were accompanied by various technical problems. The last launch took place on May 22, 2018, when K-535 Yuri Dolgoruky submarine performed a successful salvo launch of four Bulava (SS-NX-32) intercontinental ballistic missiles (ICBM) from the White Sea.