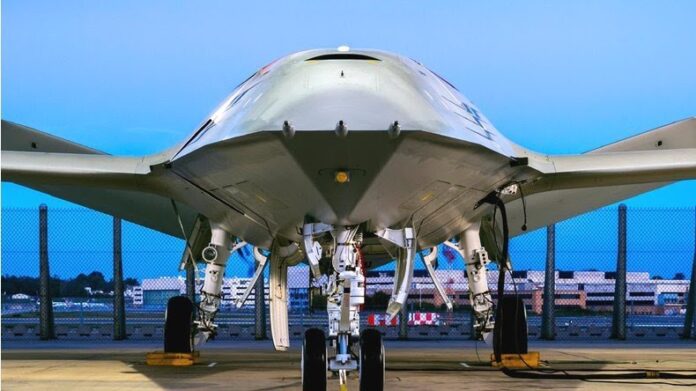 Boeing unveils a drone capable of landing on an aircraft carrier, as U.S. Navy competition heats up

Boeing recently offered a first glimpse of its newest military aircraft, a large, stingray-shaped drone it hopes will win an intense U.S. Navy competition to build an uncrewed aircraft capable of landing on an aircraft carrier.

Drones have been a vital part of the Pentagon’s arsenal for years, but the competition for a Navy carrier-based version that can refuel jet fighters in the midair would mark a significant advancement in the technology — and become another sign of how the military is increasingly integrating robots into the way it fights.

In addition to Boeing, two of the Pentagon’s top suppliers, General Atomics and Lockheed Martin, are also vying for a contract to build as many as 76 of the vehicles that would become operational in the mid 2020s. Bids are due Jan. 3, setting the stage for a high-stakes competition in 2018. Though the Navy has not yet released the value of the contract, an earlier incarnation of the effort–in which the drones would both serve as refueling aircraft and have attack capabilities — would have been worth $3 billion through 2022. As conceived now, the aircraft would not be configured to strike targets.

In recent years, the Pentagon has shown that drones are not just capable of flying from airstrips around the world, but from sea as well. In 2013, Northrop Grumman’s X-47B became the first drone to take off and land from an aircraft carrier, the USS George H.W. Bush in a flight that one top Navy official said marked “an inflection point in history on how we will integrate manned and unmanned aircraft on carrier flight decks in the future.”

Then, a year later, the X-47B flew in concert with F/A-18 fighter jets. It took its next step in 2015 when it was refueled in midair by a tanker jet.

If successful, the Boeing MQ-25 would become a key component for the Navy. With more capable defense systems, potential adversaries, particularly China, are pushing the Navy’s aircraft carriers further and further away from shorelines — and out of striking distance of fighter jets.