navalpost
Home Naval Articles Bismarck: A battleship preferred to die rather than surrender 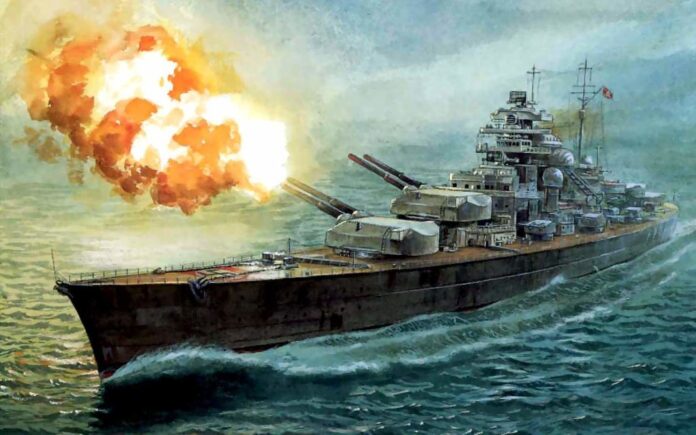 While most of the people are locked down to their homes due to coronavirus outbreak, we would like to travel to the history together in order to quench the curiosity of navy enthusiasts especially about the key incidents of historical warships.

We all know about the legendary German battleship Bismarck, a mighty ship with 251 meters length and 50.000 tons of displacement. She was referred to the strongest ship of the German navy during World War-II. Bismarck was a special ship because she was a milestone to break the rules of the Versailles Convention, which limits Germany to build warships less than 35.000 tons. After 2 years of service, she was sunk during a battle at the North Atlantic on 27th May 1941.

Though this battleship was so special, she could serve to the German Navy for only 2 years. Her last battle was an epic one because she fought until the last shell, sent the HMS Hood (a precious Royal Navy battleship) to the bottom of the ocean. Kept fighting though she was hit by thousands of gun ammunition and lots of torpedoes, and showed an epic endurance effort against British naval task force. When we read her history, a question comes to our mind; Why didn’t Bismarck surrender even though she could not continue the battle any longer? It would have saved the crew’s lives (only 115 out of 2259 sailors survived) and the captain could have scuttled the ship upon being boarded. Would the allies have stopped firing if they raised a white flag?

The event changed the courtesy of old sea battles:

During the Age of Sail it was relatively common for warships to surrender when beaten into submission (the general rule of thumb was that you could honourably surrender after taking about 10% casualties). Navies often even refitted seized ships for their own use. That gradually stopped happening over the course of the latter half of the 19th century. Prior to the voyage of KMS Bismarck, the last time any capital ship surrendered to opposing forces was over 35 years earlier, at the Battle of Tsushima.

The Russian Navy force was essentially completely worn out after the infamous Voyage of the Damned. It was a testament to the quality of Admiral Zinovy Rozhestvensky as a commander that they even made it to the Sea of Japan in the first place. Seven ships, including four battleships, and 6,000 sailors surrendered to the Imperial Japanese Navy under Admiral Heihachiro Togo.

With the case of Bismarck, in particular, we know that Admiral Gunther Lütjens (commander of the flotilla consists of battleship Bismarck and Prinz Eugen escort ship) planned to fight to the last shell, and it appears that all the senior officers were killed in the opening salvos: both bridge and the flag bridge were hit by shells, so there wasn’t really anyone left with the ability to surrender in a recognizable manner anyway.

For the German side, as a result of the common worldwide policy that naval vessels were to fight to the last rather than surrender, giving Bismarck to their arch-enemy probably could affect the morale of both sides and break the pride of Germany. Additionally, capturing ships intact means capturing intelligence. It’s easier to hide materials that could be a source of intelligence for the enemy like logs and classified materials by sending them underwater.

For British side, they needed to payback because the Bismarck sunk HMS Hood, the Royal Navy went after Bismarck with no mercy after that. They had to show that you can’t just sink a British Battleship and get away with it.

Bismarck was the first of two Bismarck-class battleships built for Nazi Germany’s Kriegsmarine. Named after Chancellor Otto von Bismarck, the ship was laid down at the Blohm & Voss shipyard in Hamburg in July 1936 and launched in February 1939. Work was completed in August 1940, when she was commissioned into the German fleet. Bismarck and her sister ship Tirpitz were the largest battleships ever built by Germany, and two of the largest built by any European power.