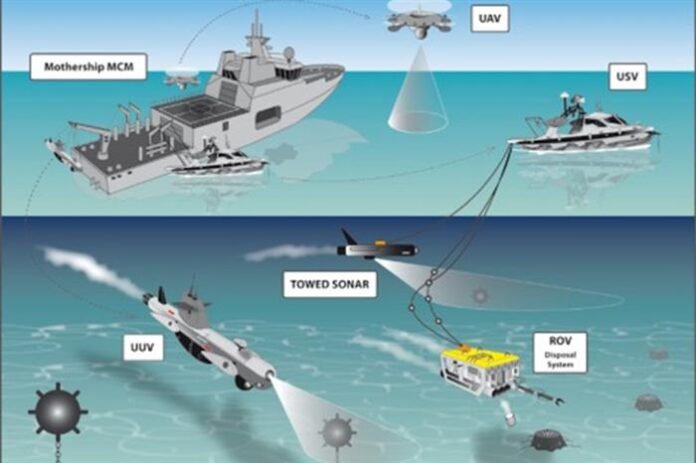 Cooperation about military issues between Belgium and Netherlands is growing year by year. On 5th July 2019, they signed the contract for the joint purchase of twelve new generation minesweeping ships for their navies. The two French companies that won the contract, which represents around 1.1 billion euros for each country, will ensure a significant share of production in Belgium.

This signing ceremony of the Common Replacement of the Countermeasure Counter Measure Capability (MCMC) involved the Deputy Prime Minister and Defense Minister Didier Reynders at the Egmont Palace, the Dutch Secretary of State for Defense , Barbara Visser and the managing directors of the Naval Group & Eca-Robotics consortium Sasu, Hervé Guillou and Guénaël Guillerme.

It is this French consortium that has obtained, through its joint venture under Belgian law, Belgium Naval & Robotics (BNR), the contract for the supply of the 12 mine-fighting ships equipped with their drone systems to the marine Belgian and Dutch.

Equipped with a total of about a hundred ” tools ” (drones), constituting a dozen systems, six ships are intended for the Belgian navy, the others going to its Dutch counterpart.

The contract of more than two billion euros will last ten years. After a design phase, BNR will launch the production phase of the ships and drone systems, with a first delivery expected in 2023.

Belgium Naval & Robotics will carry out a significant part of the contract in Belgium, including the production of certain ship equipment and all naval drones. Vessel maintenance will be carried out in Zeebrugge in partnership with Flanders Ship Repair (FSR). The maintenance of the naval drones will also be carried out in the city of West Flanders according to the needs of the customer.

The contract should generate 350 jobs per year on average in the three regions, according to BNR.

Belgium carried out this program for the benefit of the two navies, the Netherlands taking charge of the construction of four frigates – two per country.