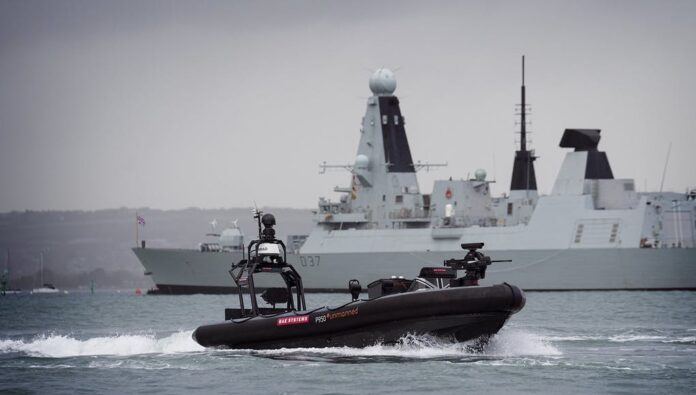 The unmanned surface vessel named “Pacific 24” Rigid Inflatable Boat (P24 RIB) will be integrated with the combat system of HMS Argyll, a Type 23 frigate, in a series of waterborne demonstrations in London’s Docklands at DSEI 2019, the international defence and security event.

The new product of BAE Systems, which makes sensation at defense industry has chance to show abilities at DSEI-2019. At 7.8 metres long, the P24 RIB has a speed of 38 knots and can operate for up to 45 hours at patrol speed or 100 nautical miles in pursuit mode, while being controlled remotely or operating autonomously. Its integration with an active warship has potential applications across a range of missions, including anti-piracy operations, border control, intelligence gathering, maritime security and force protection.

At the show, technologists from BAE Systems, in collaboration with the Royal Navy, Dstl and autonomous systems supplier L3Harris, will demonstrate the potential to make naval missions faster, easier and safer by carrying out high-speed exercises that mimic real world scenarios that include force protection, threat intercept and chase missions.

The P24 RIB, designed and built by BAE Systems, is the standard sea boat for the Royal Navy and is used widely across its surface fleet. It is also used extensively by the Royal Marines, Royal Fleet Auxiliary, Ministry of Defence Police and by allied navies and by overseas security forces. The new autonomous capability has the potential to be retrofitted to existing P24 RIBs.

A key part of proving the technology for future operational use has been to ensure a secure connection between the combat management and sensor system on board the warship and the off-board systems on the RIB.

Early trials of the technology have been conducted in collaboration with the Royal Navy’s new autonomy and lethality accelerator programme, Navy X.

At press release of BAE Systems, they also mentioned the speech of Royal Navy officials and BAE Systems’ Maritime Service Business authorities. They all praised the new product and expressed its abilities and how important it is for increasing warship’s fighting capability. BAE officials strongly expressed that for the past four years they have been working in collaboration to develop this ‘first of its kind’ technology. They look so proud to have matured autonomous maritime technology significantly, positioning the UK as a forward thinker in this unique space and providing a crucial advantage where it counts.