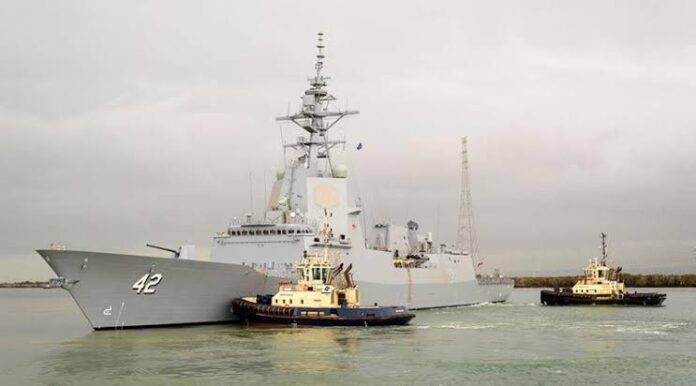 The NUSHIP Sydney expected to join the HMA Hobart and the HMA Brisbane in February 2020.

The term “NUSHIP” applies to vessels of the Australian Navy not yet commissioned, in the manner that U.S. warships are designated “PCU,” or “Pre-Commissioned Unit” until their commission grants them the opportunity to use “USS” in their names.

The Sydney is a diesel- and gasoline-powered, guided missile- and torpedo-carrying destroyer, 483 feet long. The vessel uses the Aegis Combat System, incorporating the state-of-the-art phased array radar, and will carry a single helicopter. Its class of ships provides air defense for accompanying ships, and can navigate successfully in shallow coastal waters.

The ship can also conduct undersea warfare and is equipped with modern sonar systems, decoys, surface-launched torpedoes and an array of effective close-in defensive weapons, a government statement said.

In a statement on Saturday, Defense Minister Linda Reynolds called the three ships “the most potent warships to date. By using a combination of Australian and globally proven technologies, these highly capable warships are truly world-class and will allow us to work even closer with our allies.”