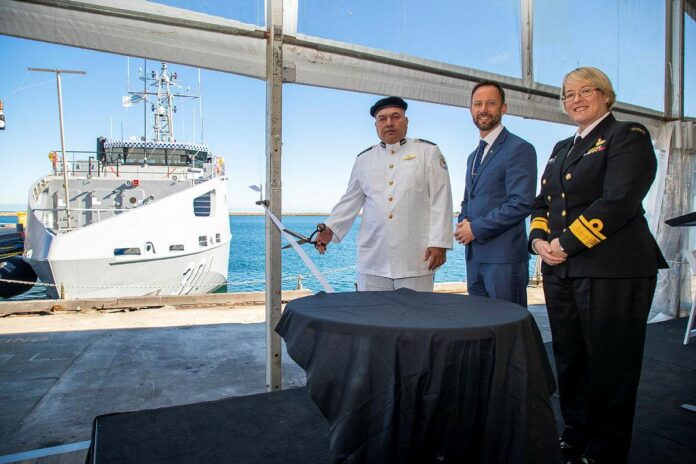 Australia has delivered a new Guardian-class patrol boat to Kiribati in accordance with Pacific Maritime Security Program, the Australian Ministry of Defence announced.

RKS Teanoai II is the 11th vessel to be delivered across the Pacific under the program.

Alongside Honorary Consul General for Kiribati Paul Wenham, Commanding Officer Superintendent Tom Redfern accepted RKS Teanoai II on June 18 on behalf of the Government of Kiribati in a ceremony at Henderson, Western Australia.

“Australia and Kiribati have long been partners and friends, and RKS Teanoai II is a tangible demonstration of our shared commitment to a sovereign, secure and prosperous Pacific,” Rear Admiral Malcolm said.

“This new asset will further strengthen our maritime security partnership and our collective effort to protect our shared maritime domain.”

“We are committed to providing high-quality assets and a best-practice package of training and maintenance support for the life of the Guardian-class patrol boat fleet,” she said.

“This project is making an essential contribution to regional security and strengthening Australian industry.

“Production of the vessels delivers 400 direct and indirect jobs, and is a significant contributor to resource and production chains.”

Under the Pacific Maritime Security Program, 21 Guardian-class patrol boats will be delivered across 12 Pacific island countries and Timor-Leste.

Austal Australia had delivered the eleventh Guardian-class Patrol Boat (GCPB) to the Australian Department of Defence on June 18.

The Guardian-class patrol boats are a class of small patrol vessels designed and built in Australia for small Pacific Ocean countries.

The class is designed to be updated replacements for the Pacific Forum-class patrol boats provided to its allies from 1987 to 1997.Australia provided twenty-two Pacific Forum vessels to twelve nations. They were designed to use commercial off-the-shelf components, to make them easier to maintain for the small nations that would operate them. Australia stood ready to help with training and maintenance, during the duration of the program, because Australia’s external security issues were eased if it could count on its sovereign neighbors having resources to police their own external security.

The 39.5 metre steel monohull patrol boat – designed, constructed and sustained by Austal Australia – is based on a proven design platform that has included the 38 metre Bay-class, 56 metre Armidale-class and 58 metre Cape-class patrol boats that are in service with the Australian Border Force and Royal Australian Navy.

Check out Naval Library App to find out the specifications of the Guardian-class patrol boats.