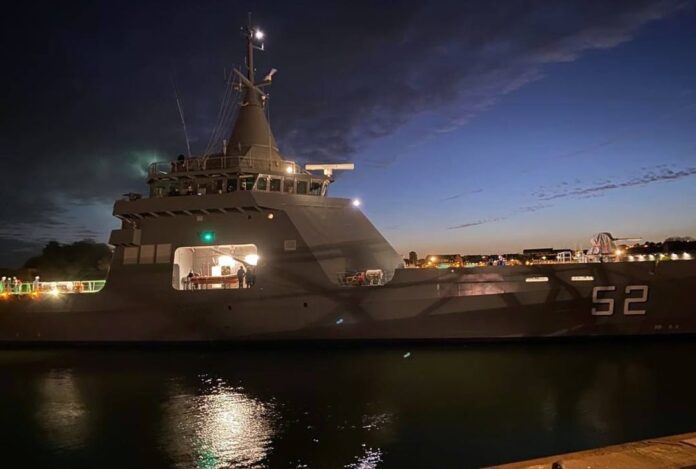 Argentine Navy’s Offshore Patrol Vessel “Piedrabuena” (P-52) has started its sea trials on Feb 25. She carried out a navigation for the first time to conduct industrial tests and systems integration. The delivery of the ship to the Argentine Navy is scheduled for April 13.

She is the second offshore patrol vessel of its class and the first of new construction that will be delivered to the Argentine Navy.

The first ship, ARA Bouchard (formerly L’Adroit) is a patrol vessel designed by the French company DCNS for maritime protection missions. She was originally part of the Gowind family of corvettes and patrol vessels but the less military members of the family like Bouchard have been moved into the Kership consortium. The design was self-funded by DCNS without an initial customer and was initially leased to the French Navy as L’Adroit before being sold to the Argentine Navy in November 2018. The vessel was commissioned as ARA Bouchard in December 2019.

The other two remaining units, which are currently in different stages of construction, will be the ARA “Almirante Storni” (P-53) and ARA “Bartolomé Cordero” (P-54).

The first group of the crew of the offshore patrol boat ARA “Piedrabuena” has been in Concarneau France is since the beginning of the month. They are currently attending the familiarization courses, complementing theoretical knowledge with onboard practices.

ARA Piedrabuena (P-52) is the second ship of Argentinian Gowind-class corvette of the Argentinian Navy. Piedrabuena was laid down in 2019 and launched on 1 October 2020 by DCNS in Lorient.

The Offshore Patrol Vessel is able to stay on the high seas for more than three weeks, to attain a speed of 20 knots, and to accommodate a helicopter. Implemented by a reduced crew of forty members, it is also able to accommodate about twenty extra passengers.