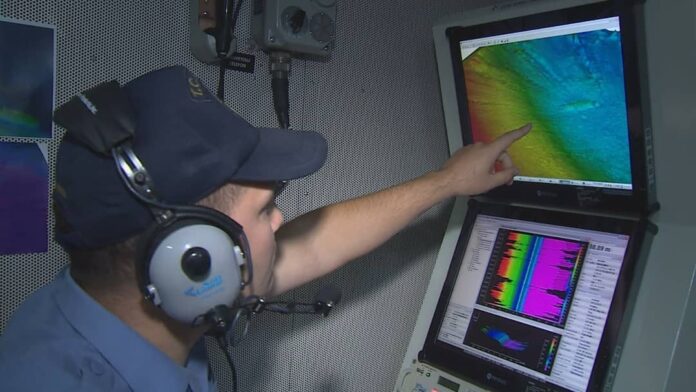 Turkish Navy’s submarine rescue and towing ship TCG IŞIN made another significant discovery last week. The last discovery of the TCG IŞIN was the wreck of HMS E7 which was laying under the Canakkale Strait, Turkey.

E7 had a short career in World War I. She took part in the Second Heligoland Bight Patrol along with E5, D2 and D3. She and the other submarines returned from the patrol on 18 August 1914. Then on 30 June 1915, E7 transitted Canakkale Strait and began a 24-day patrol in the Sea of Marmara. She succeeded in sinking 13 ships and damaging many more.

On September 4, 1915, E7 tried to transit to Marmara for the second time. But she was entangled in Ottoman antisubmarine nets off Nara Point, which the Ottoman battleship Turgut Reis had laid. The type of net in use had electric contact mines that were triggered from the shore. After several mines that formed part of the net had been detonated to no avail, a plumb line dropped with an Ottoman sinker mine. After the hand-dropped mine detonated too close for the British submarine, the captain of the submarine, Archibad Douglas Cochrane, ordered his boat surfaced, abandoned, and scuttled.

A documentary is prepared for the discovery and will be shown on the Turkish State TV incoming days.

Before discovery of HMS E7, a lot of discoveries made by these ships.

During one such exercise, a submarine from Hitler’s Lost Fleet, U23, was found after 75 years. The wreck of a German U-class submarine that sank during World War II was found off the coast of Istanbul’s Şile district in Februrary 2019. The U-23 submarine was lying at a depth of 40 metres off the Black Sea coast, two nautical miles away from the shore when it was found by one of the Turkish submarine rescue and towing ships, TCG AKIN (A-584). The second ship of the same class, TCG IŞIN (A-583), discovered the wreck of Air France Flight 152 (Lockheed L-749A Constellation), which sank in the Mediterranean Sea on 3 August 1953. The wreck was found at a depth of 270 metres on February 2018.

TCG ALEMDAR, the other submarine rescue mother ship of the Turkish Navy, ended the 100 years of loneliness of the Ottoman Navy ship Midilli (formerly the German Breslau) which sank during the First World War. It lay near the sea port of Çanakkale in Turkey. With its remotely operated vehicles and capabilities, TCG ALEMDAR conducted a commemoration ceremony at a depth of 73 metres. On November 2017, the same vessel recovered bodies from a commercial ship that sank in the Black Sea.