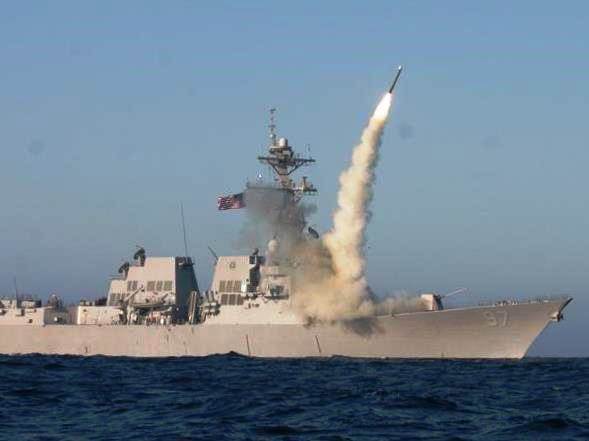 Tomahawk (BGM-109), is one of the most famous and effective strategic cruise missile at our era. Even an average person who doesn’t have interest in defence technologies knows about Tomahawk missile. Because the U.S. and UK used this missile at several operations and during that operations Tomahawk was starring item, so that TV channels and newspapers made lots of news about its abilities. While an ordinary person knows about Tomahawk, do defence technology enthusiasts ever heard of ZRGM-59A Taurus?

As a navy enthusiast who is deeply interested in missile technologies, I newly heard about it. Source of its mistery probably arise from interesting development story. It’s developed to make fire support amphibious operations but never produced .

Yes, just like Tomahawk, RGM-59 Taurus was an American project, conducted by the United States Navy, that was intended to develop a surface-to-surface missile for use as a fire support weapon during amphibious landings, replacing heavy-caliber naval guns. Developed during the early 1960s, the project was cancelled before any hardware development was undertaken.

With the demise of its big-gun cruiser and battleship fleet in the 1950s, the U.S. Navy looked for a replacement weapon for providing ship-to-shore fire support for landing troops. The LFSW (Landing Force Support Weapon) requirement of August 1961 called for a non-nuclear missile to be used against unprotected troops and unarmoured vehicles. The requirement called for missiles with ranges up to 55 km (30 nm) for beach assaults, and ultimately up to 370 km (200 nm) for long-range fire support. The efficiency of the LFSW against the intended targets was to be at least as good as guns and unguided rockets.

The Applied Physics Laboratory (APL), which had also developed the U.S. Navy’s surface-to-air missiles, studied myriad types of warheads, missile sizes, and guidance systems to determine the best design to fulfill the requirements. All-inertial guidance was potentially accurate, but would always suffer from errors in the determination of the positions of the target and the launching ship. Electro-optical (TV) guidance, then a new and promising option for missile homing, was impractical, because the intended targets did not usually present sufficient optical contrast. APL eventually decided for a simple and inexpensive inertial navigation system for midcourse guidance, with terminal accuracy provided by a missile tracking beacon pointed at the target by the forward troops. APL’s design was named Taurus, and the designation ZRGM-59A was allocated in June 1963.

By 1964, the planned characteristics of the ZRGM-59A had been established in some detail. The Taurus was to fit on existing Terrier launchers, have a range between 31 km (17 nm) and 93 km (50 nm), and carry a 450 kg (1000 lb) warhead. The accuracy of the missile was expected to be 190 m (210 yds) with inertial-only guidance, and 27 m (30 yds) with the forward homing beacon system. The Taurus design featured a Terrier-sized solid-fueled rocket booster, and an unpowered tail-controlled missile.

Lockheed was selected to develop the LFSW rocket airframe. Before any hardware for the project had been built, the project was discontinued during 1965 because of funding restrictions, nothing would come of these projects as well.

However, this project also came to nothing leaving the role of a U.S. Navy ship-to-shore missile unfilled until the arrival of the BGM-109 Tomahawk during the 1980s. Though Tomahawk and Taurus uses different kinds of guidance systems, idea of launching missile from sea to land began with unborn Taurus but brought to life with Tomahawk. That’s why we call Taurus as ancestor of Tomahawk.