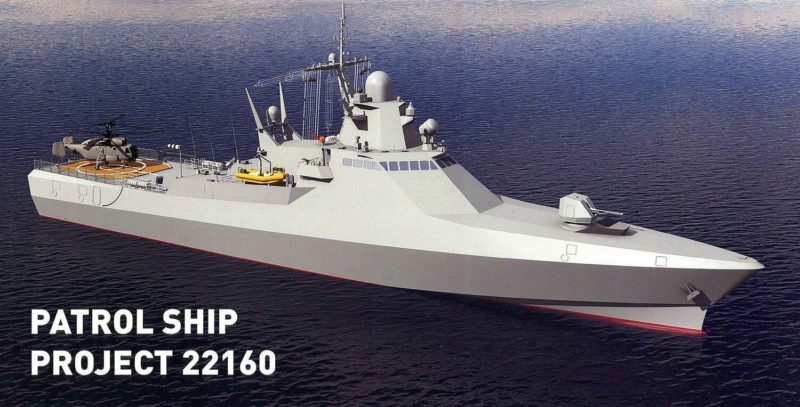 Algeria and Russia have signed an agreement to acquire four Project 22160-class patrol ships worth a total value of $ 180 million. The agreement signed on May 14 2018, reveals that Algeria will receive the first unit from Russia in September 2018 while the rest would be delivered in the coming years.
According to a spokesman for the Russian Defense Minister Sergei Shweigo, the Algerian Navy decided to acquire the Project 22160-class patrol ship after the ship displayed impressive capabilities during its deployment in Syria.
Characteristics
The Project 22160-class patrol ships are heavily armed corvettes displacing about 1,300 tons, and 308 feet in length with a range of 6,000 miles at 30 knots. The vessels features enhanced stealth characteristics, they can stay at sea for 60 days while housing a crew complement of approximately 80 people.
Sensors
In addition to navigational sensors, the patrol ship’s primary sensor system is the Pozitiv-ME1 3D active surface and air search radar, which has a range against fighter sized targets of about 75 to 100 miles.
Missions
The Project 22160-class patrol ships was designed for plethora of missions including anti-piracy patrol, counter-terrorism, and even strike and special operations support. The vessels can also act as sea control ships for blue water operations. A pair of rigid hull inflatable boats that flank each side of the ship’s forecastle. These can be used for delivering boarding parties, as tenders, and for other duties. Additionally, the ship is fitted with an helicopter hanger which can accommodate a medium multi-purpose helicopter like the KA-27/28/29. This gives the ship a over-the-horizon surveillance, strike, and search and rescue capability.
Armanment
The class’s armament will include the Kalibr-NK cruise missile. The ship will also have a helicopter deck and hangar for one Ka-27 helicopter. The enhanced version of the Project 22160 class also features a Shtil-1 vertical launch missile system between the bridge and the deck gun packing between a dozen and two dozen 9M317ME missiles.