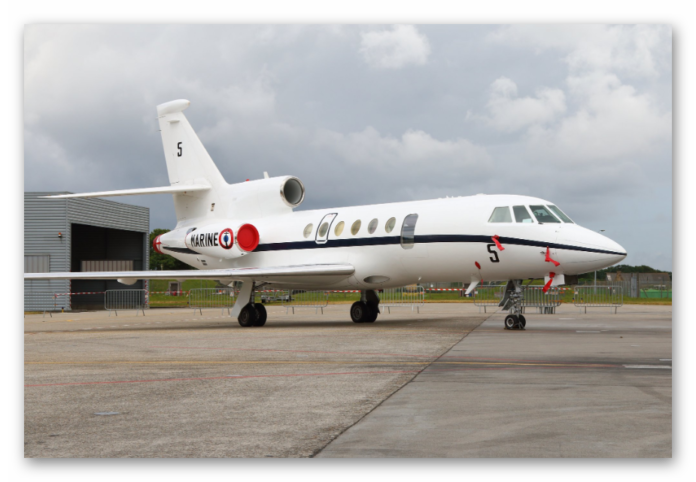 Albatros will be delivered at 2023 and replace Falcon 200 Gardian aircraft which will be started to move out of phase next year.

At the Paris Air Show 2019 the French minister of Armed Forces officially confirmed the Falcon 2000LXS will replace five ageing Falcon 200 Gardian operated by the Aeronautique Navale (Aéronavale, French Navy) based at Tahiti/Faaa (Pacific Ocean) and eight Falcon 50MS/MI based at Lorient/Lann-Bihoué.

One of the key assets within the Project Loi de Programme Militaire 2019-2025 (LPM, Law of Military Programming) is the l’AVion de Surveillance et d’Intervention MARitime (AVSIMAR) programme, launched on 9 November 2018. The General Directorate of Armament (DGA) notified Dassault Aviation to study the necessary adaptations to fulfill the operational missions of surveillance and maritime intervention according to the standards desired by the French Navy. This future maritime surveillance and intervention aircraft (AVSIMAR) will be named Albatros.

The order for the Aéronavale’s new surveillance and maritime aircraft, planned for 2020, is under preparation and will initially consist of seven Falcon 2000LXS. An option for six more needs to be confirmed in 2025. The first three Falcon 2000LXS Albatros aircraft are scheduled for delivery in 2024 and 2025, the remaining ten should follow between 2026 and 2030.

Originally, the Falcon 2000LXS Maritime Reconnaissance Aircraft (MRA) was developed for the Aéronavale’s AVSIMAR programme. In March 2015, the Japan Coast Guard selected the Falcon 2000MRA, in its maritime surveillance version (Falcon 2000MSA). The country ordered five aircraft, which are further developed by L-3 Platform Integration and Thales for mission equipment. One aircraft, registration JA573A, is known as delivered. Further deliveries are expected in the coming months.

Albatrosses are among the most spectacular gliders of all birds, able to stay aloft in windy weather for hours without ever flapping their extremely long, narrow wings. In calm air an albatross has trouble keeping its stout body airborne and prefers to rest on the water surface. Like other oceanic birds, albatrosses drink seawater. Although they normally live on squid, they also are seen to accompany ships to feed on garbage.

Nothing symbolizes this pioneering spirit like the albatross. These birds travel long distances around the world, all while maintaining a special connection to their place of birth.

Their life is a journey. Constantly on the move, albatrosses use their formidable wingspan to cross oceans and fly for hours without rest. When they do land, they’re sociable creatures that enjoy the company of others.

Like expats, Albatrosses also have to face the challenges of an itinerant lifestyle. Take offs and landings can be difficult, often leading to small injuries when arriving somewhere new.