navalpost
Home Exercises A Three-Carrier Naval Force is Finishing A Multi-Day Exercise in The Western... 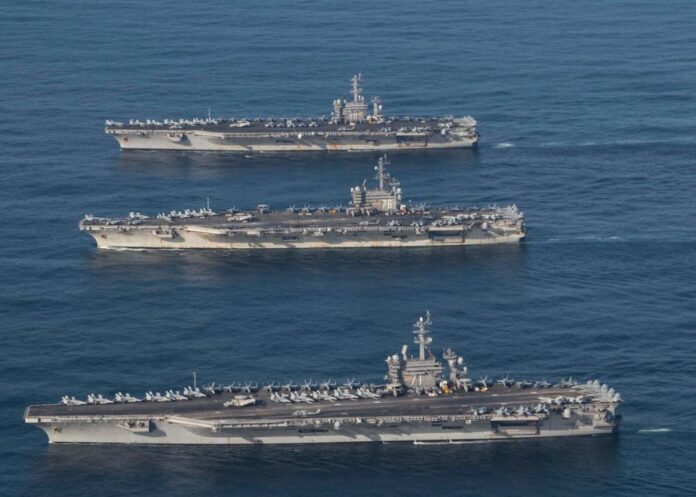 A three-carrier naval force is finishing a multi-day exercise in the Western Pacific, demonstrating the Navy’s unique capability to operate multiple carrier strike groups as a coordinated effort, according to U.S.Navy officials.
The exercise features the aircraft carriers USS Ronald Reagan, USS Nimitz, and USS Theodore Roosevelt and includes air defense drills, sea surveillance, replenishments at sea, defensive air combat training, close-in coordinated maneuvers and other training, Navy officials said.
Ships from Japan and South Korea joined the exercise as well.
The exercise is the first time three carrier strike groups have operated together in the Western Pacific since exercises Valiant Shield 2006 and 2007 off the coast of Guam, according to Navy officials.
Officials point out Navy aircraft carriers more recently have conducted dual-carrier strike group operations in the Western Pacific including in the South China Sea, East China Sea and Philippine Sea. 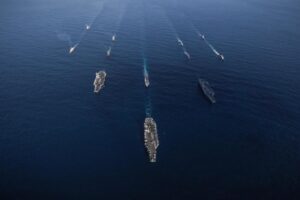 These exercises typically happen when an aircraft carrier deployed to the 7th Fleet area of operations joins with the carrier based in Japan. In this instance, the Nimitz was finishing a deployment in the 5th Fleet area — the Persian Gulf — and the Roosevelt was relieving it. The Reagan — homeported in Japan — joined the other two carriers, which are based in the Western United States.