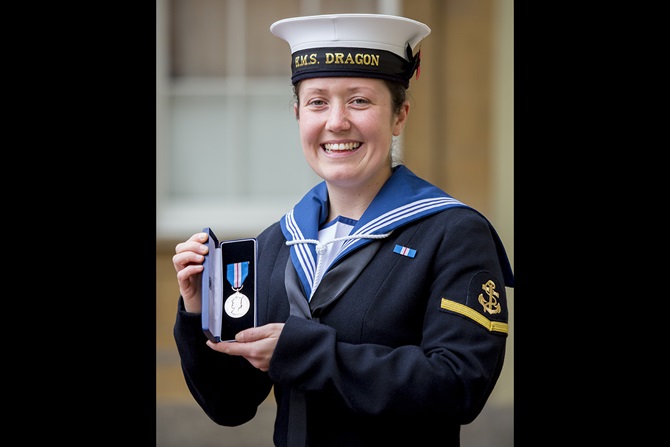 A sailor from HMS Dragon has received the Queen’s Gallantry Medal for helping in the rescue of 14 sailors from a racing yacht.
LS Sally Hughes, who received her medal from the Queen at Buckingham Palace, was deployed in the Type 45 destroyer when it was diverted to assist the Clyde Challenger yacht, which had lost a mast in 18ft seas 500 miles south west of Land’s End in February this year.
LS Hughes, who joined the Royal Navy in 2009, was tasked to drive the ship’s sea boat, a 24ft rigid inflatable boat.
The Clyde Challenger was taking on water and drifting further out into the worsening Atlantic storm when HMS Dragon arrived on the scene.
In the challenging sea state the sea boat and the yacht were regularly lost from HMS Dragon’s view as they dipped into the huge Atlantic swell, with the 50mph winds making it even more difficult.
Despite the danger to herself and her crewmate, LS Hughes persisted with the rescue and made 13 approaches over a gruelling two-hour period to lift the crew off the stricken yacht and ferry them back to the safety of HMS Dragon.
During one of the trips, the sea boat was swung into the side of Dragon by the high seas and the force of the impact punctured the boat and injured LS Hughes’ arm; she elected to simply switch to the reserve sea boat and continue to rescue. 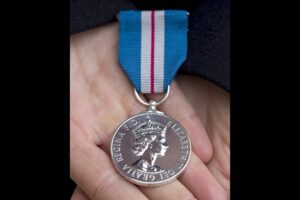