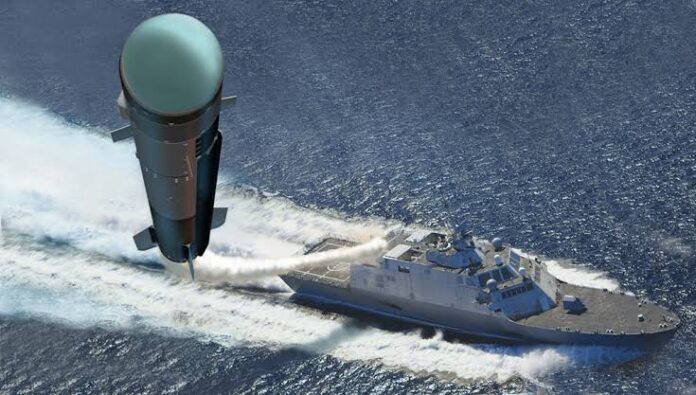 The asymmetric threat, which increases the uncertainty of war scene (called “Fog of the war” by Clausewitz), is a problem for the planners and decision-makers for decades. It showed its brutal face for the first time at the USS Cole incident that was attacked by a terrorist boat while anchored off the Aden at 2000. After the horrible incident, this issue has become the beginning of new warfare dubbed as “Asymmetric Warfare”. Both planners and engineers have been working for the best solutions ensuring the safety of the asset, in the dangerous areas such as narrow straits, and during the port entries or berthing.

There are many problems at this kind of warfare: identifying the enemy, making the correct decision, detecting and engaging the target. While being anchored off a harbour, if you see a jetski or a fast boat approaching towards your ship, it could be either a terrorist assault or a boat having rudder trouble and cannot change course. Though you identify the contact as a hostile attack, it’s not easy to destroy a small fast craft with guns, because the manoeuvre ability of the fast craft decreases hit probability dramatically. Sometimes even sensors become hopeless against their fast manoeuvres so that they can proceed to the sensor’s blind sector just in seconds and it’s almost impossible to sustain a live track on the fast boat. Moreover, at an anchorage area or a strait, sensors’ performance might decrease because of the density of vessels and geographical situation.

To deal with the asymmetric threat, planners dwell on a new kind of solution lately, by using guided missiles against fast crafts. As known, laser beam-riding missiles that launched by helicopters is the nightmare of fast inshore attacking crafts (FIAC) which have poor air defence capability. Because of the accuracy of the laser track is excellent, when the missile is launched, the probability of a hit is very likely.

Some of the countries, like Iran, have turned this newly emerging threat into their favour and made it a part of their armed forces. More than 200 armed boats of Iran is a big threat for any kind of ship from aircraft carriers to destroyers. A coordinated attack from some of these boats, as called by U.S. Navy and the British Royal Navy “Swarm Attacks” is one of the biggest threat for the navies.

Swarm attacks are high-risk, coordinated assaults sometimes directed against multiple targets or building complexes, using mobile groups to circumvent security measures, allowing attackers to inflict casualties, garner news coverage and, in recent years, to inflict considerable damage prior to the neutralization of the assailants. Should swarms of armed small boats seek to surround, overwhelm and confuse large Navy ships in a coordinated barrage of attacks, surface ship radar could be jammed, long and medium-range ship defences could be rendered ineffective and virtually all angles of a ship could be hit quickly at one time.

The U.S. Navy is very concerned with the probability of Swarm Attacks of FIACs against its naval assets, especially in critical Persian Gulf region. While on a mission at the Gulf or other areas close to the shore, if the asset encounters to a swarm attack of multiple armed boats, it could be impossible to defend itself with its guns or SSMs. Small boats, manned or unmanned, could launch electronic warfare attacks, hit with small arms or even fire various kinds of larger weapons. It is extremely difficult to defend yourself against them for many reasons, like limited sensor tracking and weapon capability.

It should be discussed how ethic it is, to use asymmetric threat against conventional units, could be contrary to the law of war or international law. But it’s clear that this new threat, the asymmetric attack by terrorists or swarm FIAC attacks by countries is an annoying problem for all countries.

What are the developments to increase hit probability against FIACs?

As we shared before the U.S. and Turkish navies are developing some new solutions against asymmetric threats.

The U.S. Navy has successfully completed structural testing of the Surface-to-Surface Missile Module (SSMM), confirms that the weapon system can be installed and safely operated on the littoral combat ships (LCS) and ensured the efficiency by launching Longbow Hellfire missile against remote-controlled RHIBs (Rigid Hull Inflatable Boat). As the test-fire is shown at the video below, the Hellfire missile was successfully hit the fast target and proved the efficiency. The LCS engaged 3 FIACs simultaneously which are performing swarm attack scenarios against the asset.

Hellfire is an Air-to-Ground missile which is widely used against small boats or naval units which have limited AAW capability. To be honest the range of the missile is not enough to use as SSM, because it’s shorter than many of the guns. But this criticism would be wrong because the purpose to adapt this missile to the ships to improve survivability against asymmetric threats or swarm attacks of fast boats.

Another example is from Turkey is that Turkish Navy is adapting indigenous L-UMTAS missile developed by ROKETSAN Co., a key member of growing Turkish defense industry, to its Aviso-class corvettes. Turkey started mass-production for these missiles and using them with the ATAK helicopters against moving ground targets like tanks. At “Denizkurdu” exercise, occurred at the end of May 2019, Aviso (Burak)-class corvette TCG BARTIN (pennant number:F-504), successfully fired the long-range L-UMTAS anti-armor (anti-tank) missile and destroyed the fast surface drone successfully. The video of the test-fire is shown below.

What are the key issues to earn such capability?

As known generally, guided missiles are much more expensive than classical gun ammo. Generally guided missiles are launched against critical targets which could not be covered by guns in order to neutralize it. While equipping the naval assets with guided missiles against FIACs, cost/efficiency is a very important issue to concern. Swarm attacks could cause to lose a warship, while considering the cost (as money and prestige) of a warship, the cost of the guided-missile could be regarded as “nothing”.

Technology is growing day by day, developing new solutions and inventions. Probably we will see new investments against this threat because all inventions are made on a need. As one of the most important needs of today is to counter the asymmetric threat, there will be new developments and tactics against swarm attacks.