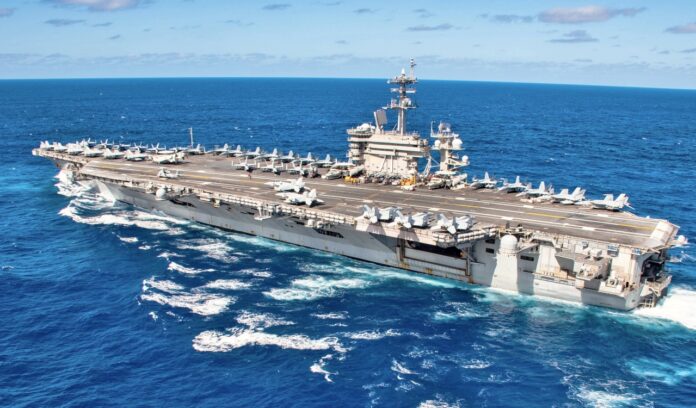 Thirteen sailors aboard the aircraft carrier USS Theodore Roosevelt (TR) have tested positive again for Covid-19 after recovering from the disease and returning to the ship, which has been stranded in Guam since late March after an outbreak of the virus, Politico reported.

The Roosevelt’s crew began returning to the ship in late April after spending a month either in quarantine or isolation in Guam. But sailors in early May began showing symptoms of the virus, such as a cough and fever.

These sailors had previously tested positive and were removed from the ship in order to self-quarantine. They had all tested negative twice before being allowed back on board before this latest incident of testing positive again for the virus.

“This week, a small number of TR Sailors who previously tested COVID positive and met rigorous recovery criteria have retested positive,” said Navy spokesperson Cmdr. Myers Vasquez. “These protocols resulted in a small number of close contacts who were also removed from the ship, quarantined and tested.

“The ship remains on the road to recovery and will prepare to get back underway once a critical mass of crew with the required expertise is onboard,” said Vasquez.

The official said it is not clear if sailors have somehow been re-infected or if very low levels of the virus have remained in their bodies and testing had not caught it.More than 1,000 of the aircraft carrier’s nearly 4,900-member crew had tested positive for coronavirus following an outbreak aboard the ship.